Aims: The aim of this paper is to explore and map the age and abundance structure of the stars in the nearby Galactic disk.
Methods: We have conducted a high-resolution spectroscopic study of 714 F and G dwarf and subgiant stars in the Solar neighbourhood. The star sample has been kinematically selected to trace the Galactic thin and thick disks to their extremes, the metal-rich stellar halo, sub-structures in velocity space such as the Hercules stream and the Arcturus moving group, as well as stars that cannot (kinematically) be associated with either the thin disk or the thick disk. The determination of stellar parameters and elemental abundances is based on a standard analysis using equivalent widths and one-dimensional, plane-parallel model atmospheres calculated under the assumption of local thermodynamical equilibrium (LTE). The spectra have high resolution (R = 40 000-110 000) and high signal-to-noise (S/N = 150-300) and were obtained with the FEROS spectrograph on the ESO 1.5 m and 2.2 m telescopes, the SOFIN and FIES spectrographs on the Nordic Optical Telescope, the UVES spectrograph on the ESO Very Large Telescope, the HARPS spectrograph on the ESO 3.6 m telescope, and the MIKE spectrograph on the Magellan Clay telescope. The abundances from individual Fe i lines were were corrected for non-LTE effects in every step of the analysis.
Results: We present stellar parameters, stellar ages, kinematical parameters, orbital parameters, and detailed elemental abundances for O, Na, Mg, Al, Si, Ca, Ti, Cr, Fe, Ni, Zn, Y, and Ba for 714 nearby F and G dwarf stars. Our data show that there is an old and α-enhanced disk population, and a younger and less α-enhanced disk population. While they overlap greatly in metallicity between -0.7 < [Fe/H] ≲ +0.1, they show a bimodal distribution in [α/Fe]. This bimodality becomes even clearer if stars where stellar parameters and abundances show larger uncertainties (Teff ≲ 5400 K) are discarded, showing that it is important to constrain the data set to a narrow range in the stellar parameters if small differences between stellar populations are to be revealed. In addition, we find that the α-enhanced population has orbital parameters placing the stellar birthplaces in the inner Galactic disk while the low-α stars mainly come from the outer Galactic disk, fully consistent with the recent claims of a short scale-length for the α-enhanced Galactic thick disk. We have also investigated the properties of the Hercules stream and the Arcturus moving group and find that neither of them presents chemical or age signatures that could suggest that they are disrupted clusters or extragalactic accretion remnants from ancient merger events. Instead, they are most likely dynamical features originating within the Galaxy. We have also discovered that a standard 1D, LTE analysis, utilising ionisation and excitation balance of Fe i and Fe ii lines produces a flat lower main sequence. As the exact cause for this effect is unclear we chose to apply an empirical correction. Turn-off stars and more evolved stars appear to be unaffected. 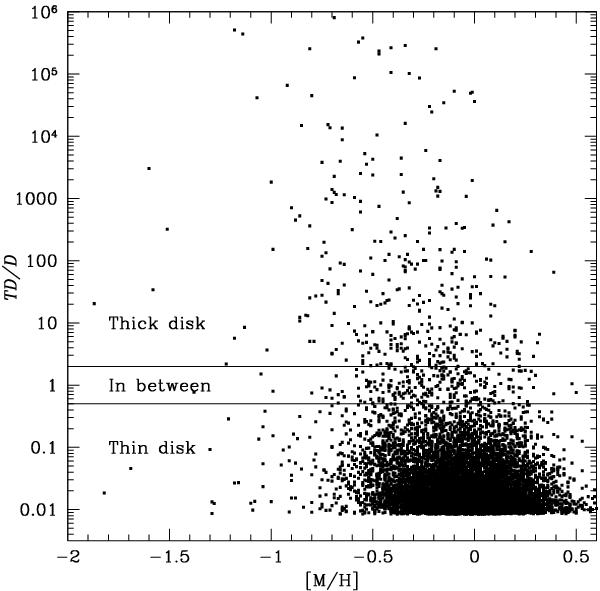