Context. Symbiotic X-ray binaries form a subclass of low-mass X-ray binary systems consisting of a neutron star accreting material from a red giant donor star via stellar wind or Roche lobe overflow. Only a few confirmed members are currently known; 4U 1700+24 is a good candidate as it is a relatively bright X-ray object, possibly associated with the late-type star V934 Her.
Aims: We analysed the archive XMM-Newton and Swift/XRT observations of 4U 1700+24 in order to have a uniform high-energy (0.3-10 keV) view of the source. Apart from the 2003, 2010, and 2012 data, publicly available but still unpublished, we also took the opportunity to re-analyze a set of XMM-Newton data acquired in 2002.
Methods: After reducing the XMM-Newton and Swift/XRT data with standard methods, we performed a detailed spectral and timing analysis.
Results: We confirmed the existence of a red-shifted O VIII Ly-α transition (already observed in the 2002 XMM-Newton data) in the high-resolution spectra collected via the RGS instruments. The red-shift of the line is found in all the analysed observations and, on average, it was estimated to be ≃0.009. We also observed a modulation of the centroid energy of the line on short time scales (a few days) and discuss the observations in the framework of different scenarios. If the modulation is due to the gravitational red-shift of the neutron star, it might arise from a sudden re-organization of the emitting X-ray matter on the scale of a few hundreds of km. Alternatively, we are witnessing a uni-polar jet of matter (with typical velocity of 1000-4000 km s-1) possibly emitted by the neutron star in an almost face-on system. The second possibility seems to be required by the apparent lack of any modulation in the observed X-ray light curve. We also note also that the low-resolution spectra (both XMM-Newton and Swift/XRT in the 0.3-10 keV band) show the existence of a black-body radiation emitted by a region (possibly associated with the neutron star polar cap) with typical size from a few tens to hundreds of meters. The size of this spot-like region reduces as the overall luminosity of 4U 1700+24 decreases. 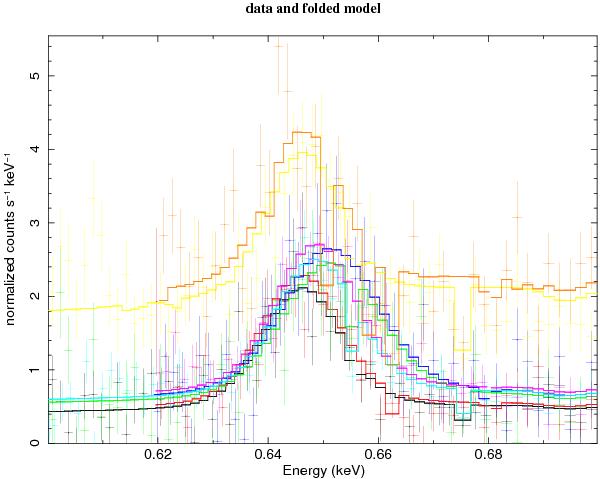