Context. Near-Earth asteroid (25143) Itokawa was visited by the Hayabusa spacecraft in 2005, resulting in a highly detailed shape and surface topography model. This model has led to several predictions for the expected radiative torques on this asteroid, suggesting that its spin rate should be decelerating.
Aims: To detect changes in rotation rate that may be due to YORP-induced radiative torques, which in turn may be used to investigate the interior structure of the asteroid.
Methods: Through an observational survey spanning 2001 to 2013 we obtained rotational lightcurve data at various times over the last five close Earth-approaches of the asteroid. We applied a polyhedron-shape-modelling technique to assess the spin-state of the asteroid and its long term evolution. We also applied a detailed thermophysical analysis to the shape model determined from the Hayabusa spacecraft.
Results: We have successfully measured an acceleration in Itokawa's spin rate of dω/dt = (3.54 ± 0.38) × 10-8 rad day-2, equivalent to a decrease of its rotation period of ~45 ms year-1. From the thermophysical analysis we find that the centre-of-mass for Itokawa must be shifted by ~21 m along the long-axis of the asteroid to reconcile the observed YORP strength with theory.
Conclusions: This can be explained if Itokawa is composed of two separate bodies with very different bulk densities of 1750 ± 110 kg m-3 and 2850 ± 500 kg m-3, and was formed from the merger of two separate bodies, either in the aftermath of a catastrophic disruption of a larger differentiated body, or from the collapse of a binary system. We therefore demonstrate that an observational measurement of radiative torques, when combined with a detailed shape model, can provide insight into the interior structure of an asteroid. Futhermore, this is the first measurement of density inhomogeneity within an asteroidal body, that reveals significant internal structure variation. A specialised spacecraft is normally required for this. 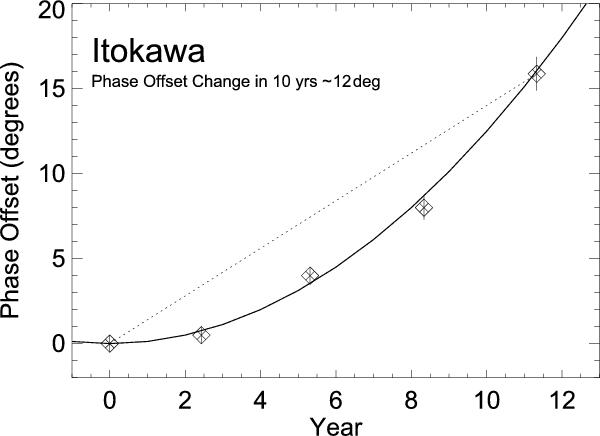