Possible structure in the GRB sky distribution at redshift two

Context. Research over the past three decades has revolutionized cosmology while supporting the standard cosmological model. However, the cosmological principle of Universal homogeneity and isotropy has always been in question, since structures as large as the survey size have always been found each time the survey size has increased. Until 2013, the largest known structure in our Universe was the Sloan Great Wall, which is more than 400 Mpc long located approximately one billion light years away.
Aims: Gamma-ray bursts (GRBs) are the most energetic explosions in the Universe. As they are associated with the stellar endpoints of massive stars and are found in and near distant galaxies, they are viable indicators of the dense part of the Universe containing normal matter. The spatial distribution of GRBs can thus help expose the large scale structure of the Universe.
Methods: As of July 2012, 283 GRB redshifts have been measured. Subdividing this sample into nine radial parts, each containing 31 GRBs, indicates that the GRB sample having 1.6 < z < 2.1 differs significantly from the others in that 14 of the 31 GRBs are concentrated in roughly 1/8 of the sky. A two-dimensional Kolmogorov-Smirnov test, a nearest-neighbour test, and a Bootstrap Point-Radius Method explore the significance of this clustering.
Results: All tests used indicate that there is a statistically significant clustering of the GRB sample at 1.6 < z < 2.1. Furthermore, this angular excess cannot be entirely attributed to known selection biases, making its existence due to chance unlikely.
Conclusions: This huge structure lies ten times farther away than the Sloan Great Wall, at a distance of approximately ten billion light years. The size of the structure defined by these GRBs is about 2000-3000 Mpc, or more than six times the size of the largest known object in the Universe, the Sloan Great Wall. 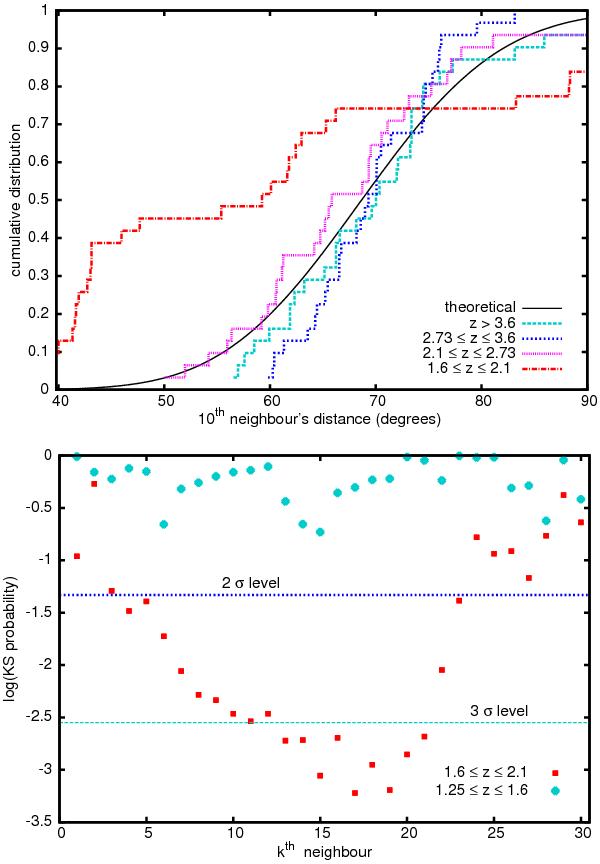