Structure and substructure analysis of DAFT/FADA galaxy clusters in the [0.4-0.9] redshift range

Context. The DAFT/FADA survey is based on the study of ~90 rich (masses found in the literature >2 × 1014 M⊙) and moderately distant clusters (redshifts 0.4 < z < 0.9), all with HST imaging data available. This survey has two main objectives: to constrain dark energy (DE) using weak lensing tomography on galaxy clusters and to build a database (deep multi-band imaging allowing photometric redshift estimates, spectroscopic data, X-ray data) of rich distant clusters to study their properties.
Aims: We analyse the structures of all the clusters in the DAFT/FADA survey for which XMM-Newton and/or a sufficient number of galaxy redshifts in the cluster range are available, with the aim of detecting substructures and evidence for merging events. These properties are discussed in the framework of standard cold dark matter (ΛCDM) cosmology.
Methods: In X-rays, we analysed the XMM-Newton data available, fit a β-model, and subtracted it to identify residuals. We used Chandra data, when available, to identify point sources. In the optical, we applied a Serna & Gerbal (SG) analysis to clusters with at least 15 spectroscopic galaxy redshifts available in the cluster range. We discuss the substructure detection efficiencies of both methods.
Results: XMM-Newton data were available for 32 clusters, for which we derive the X-ray luminosity and a global X-ray temperature for 25 of them. For 23 clusters we were able to fit the X-ray emissivity with a β-model and subtract it to detect substructures in the X-ray gas. A dynamical analysis based on the SG method was applied to the clusters having at least 15 spectroscopic galaxy redshifts in the cluster range: 18 X-ray clusters and 11 clusters with no X-ray data. The choice of a minimum number of 15 redshifts implies that only major substructures will be detected. Ten substructures were detected both in X-rays and by the SG method. Most of the substructures detected both in X-rays and with the SG method are probably at their first cluster pericentre approach and are relatively recent infalls. We also find hints of a decreasing X-ray gas density profile core radius with redshift.
Conclusions: The percentage of mass included in substructures was found to be roughly constant with redshift values of 5-15%, in agreement both with the general CDM framework and with the results of numerical simulations. Galaxies in substructures show the same general behaviour as regular cluster galaxies; however, in substructures, there is a deficiency of both late type and old stellar population galaxies. Late type galaxies with recent bursts of star formation seem to be missing in the substructures close to the bottom of the host cluster potential well. However, our sample would need to be increased to allow a more robust analysis.

Tables 1, 2, 4 and Appendices A-C are available in electronic form at http://www.aanda.org 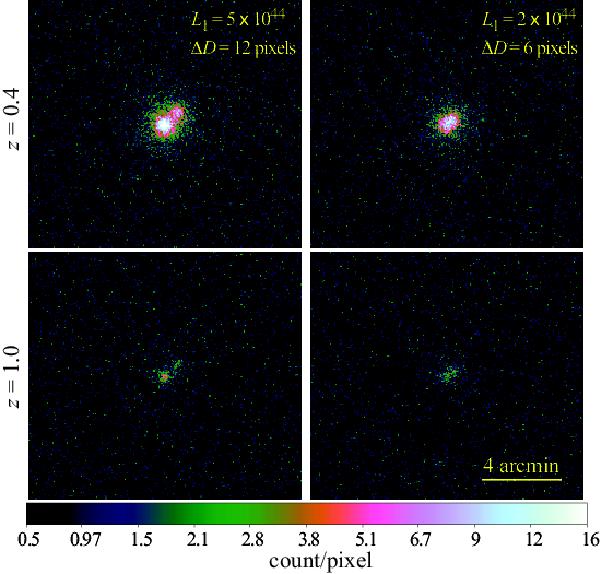