The close environment of high-mass X-ray binaries at high angular resolution. I. VLTI/AMBER and VLTI/PIONIER near-infrared interferometric observations of

Context. Recent improvements in the sensitivity and spectral resolution of X-ray observations have led to a better understanding of the properties of matter in the near vicinity of high-mass X-ray binaries (HMXB) hosting a supergiant star and a compact object. However, the geometry and physical properties of their environments on larger scales (up to a few stellar radii) are currently only predicted by simulations but have never been directly observed.
Aims: We aim to explore the environment of at a few stellar radii (R⋆) of the supergiant using spatially resolved observations in the near-infrared, and to study its dynamical evolution along the nine-day orbital period of the system.
Methods: We observed in 2010 and 2012 using near-infrared long baseline interferometry at the Very Large Telescope Interferometer (VLTI), respectively with the AMBER instrument in the K band (medium spectral resolution), and the PIONIER instrument in the H band (low spectral resolution). The PIONIER observations span one orbital period to monitor possible evolutions in the geometry of the system.
Results: We resolved a structure of 8 ± 3 R⋆ from the AMBER K-band observations, and 2.0-1.2+0.7R* from the PIONIER H-band data. From the closure phase observable, we found that the circumstellar environment of is symmetrical in the near-infrared. We observed comparable interferometric measurements between the continuum and the spectral lines in the K band, meaning that both emissions originate from the same forming region. From the monitoring of the system over one period in the H band in 2012, we found the signal to be constant with the orbital phase within the error bars.
Conclusions: We propose three possible scenarios for this discrepancy between the two measurements: 1) there is a strong temperature gradient in the supergiant wind, leading to a hot component that is much more compact than the cool part of the wind observed in the K band; 2) we observed a diffuse shell in 2010, possibly triggered by an off-state in the accretion rate of the neutron star that was dissolved in the interstellar medium in 2012 during our second observations; or 3) the structure observed in the H band was the stellar photosphere instead of the supergiant wind.

Based on observations collected at the European Organization for Astronomical Research in the Southern Hemisphere, Chile. Programs 085.D-0029(A) and 088.D-0185(A). 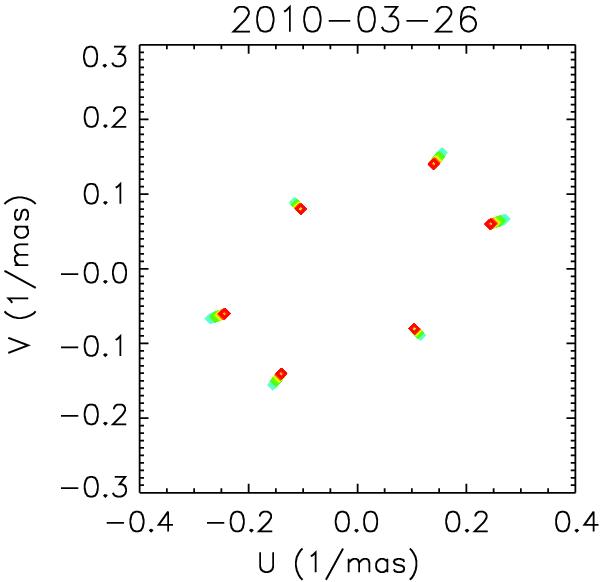