New molecules in IRC +10216: confirmation of C5S and tentative identification of MgCCH, NCCP, and SiH3CN

The carbon-star envelope IRC +10216 harbors a rich variety of molecules, with more than 80 detected to date. During the course of a λ 3 mm survey of IRC +10216 carried out with the IRAM 30-m telescope we have detected various weak lines, with antenna temperatures of a few mK, which we assign to rotational transitions of four new molecules. The observation of three lines of C5S confirms a previous tentative identification of this molecule based on a line at 24.0 GHz. We also report the tentative identification of three molecules not yet observed in space: MgCCH, the first metal acetylide detected in space, and NCCP and SiH3CN, the phosphorus and silicon analogs of cyanogen (NCCN) and methyl cyanide (CH3CN). We derive the following column densities: N(C5S) = (2-14) × 1012 cm-2 (depending on the rotational temperature adopted), N(MgCCH) = 2 × 1012 cm-2, N(NCCP) = 7 × 1011 cm-2, and N(SiH3CN) = 1012 cm-2. The S-bearing carbon chain C5S is less abundant than C3S, while MgCCH has an abundance in between that of MgNC and those of MgCN and HMgNC. On the other hand, NCCP and SiH3CN are the least abundant P- and Si-bearing molecules observed to date in IRC +10216. Based on the behavior of similar molecules it is likely that these four species are formed in the outer circumstellar layers of IRC +10216. We discuss possible gas-phase formation routes.

Based on observations carried out with the IRAM 30 m telescope. IRAM is supported by INSU/CNRS (France), MPG (Germany) and IGN (Spain).Appendix A is available in electronic form at http://www.aanda.org 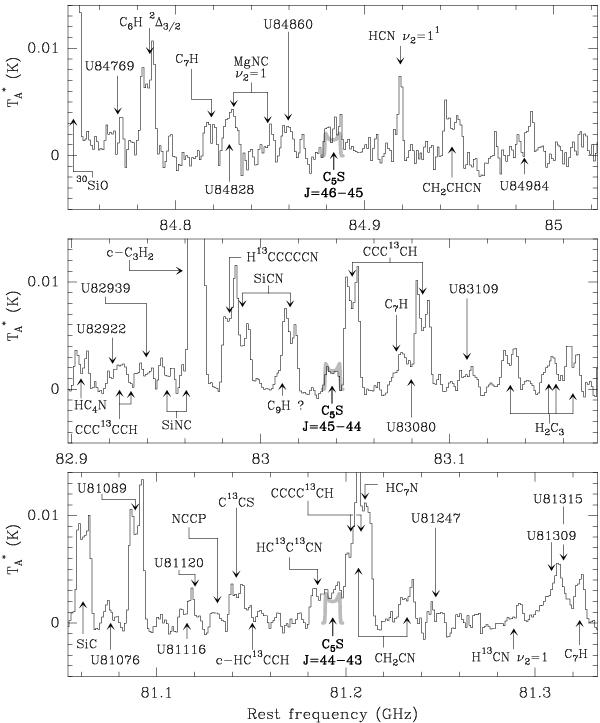