Context. Star formation efficiency (SFE) theories are currently based on statistical distributions of turbulent cloud structures and a simple model of star formation from cores. They remain poorly tested, especially at the highest densities.
Aims: We investigate the effects of gas density on the SFE through measurements of the core formation efficiency (CFE). With a total mass of ~2 × 104 M☉, the W43-MM1 ridge is one of the most convincing candidate precursors of Galactic starburst clusters and thus one of the best places to investigate star formation.
Methods: We used high-angular resolution maps obtained at 3 mm and 1 mm within the W43-MM1 ridge with the IRAM Plateau de Bure Interferometer to reveal a cluster of 11 massive dense cores, and, one of the most massive protostellar cores known. A Herschel column density image provided the mass distribution of the cloud gas. We then measured the "instantaneous" CFE and estimated the SFE and the star formation rate (SFR) within subregions of the W43-MM1 ridge.
Results: The high SFE found in the ridge (~6% enclosed in ~8 pc3) confirms its ability to form a starburst cluster. There is, however, a clear lack of dense cores in the eastern part of the ridge, which may be currently assembling. The CFE and the SFE are observed to increase with volume gas density, while the SFR per free fall time steeply decreases with the virial parameter, αvir. Statistical models of the SFR may describe the outskirts of the W43-MM1 ridge well, but struggle to reproduce its inner part, which corresponds to measurements at low αvir. It may be that ridges do not follow the log-normal density distribution, Larson relations, and stationary conditions forced in the statistical SFR models. 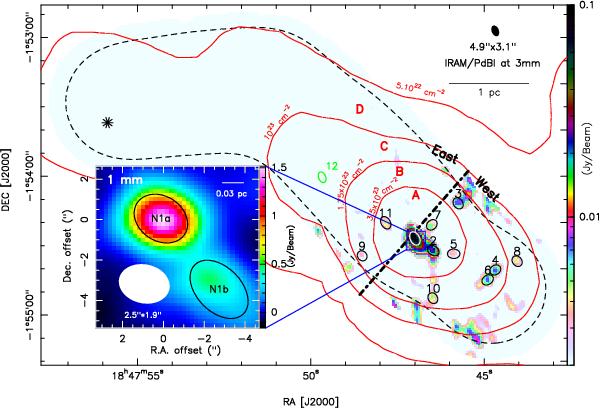