Release timescales of solar energetic particles in the low corona


Aims: We present a systematic study of the timing and duration of the release processes of near-relativistic (NR; >50 keV) electrons in the low corona.
Methods: We analyze seven well-observed events using in situ measurements by both the ACE and Wind spacecraft and context electromagnetic observations in soft X-rays, radio, hard X-rays and white light. We make use of velocity dispersion analysis to estimate the release time of the first arriving electrons and compare with the results obtained by using a simulation-based approach, taking interplanetary transport effects into account to unfold the NR electron release time history from in situ measurements.
Results: The NR electrons observed in interplanetary space appear to be released during either short (<30 min) or long (>2 h) periods. The observation of NR electron events showing beamed pitch-angle distributions (PADs) during several hours is the clearest observational signature of sustained release in the corona. On the other hand, the in situ observation of PADs isotropizing in less than a couple of hours is a clear signature of a prompt release of electrons in the low corona. Short release episodes appear to originate in solar flares, in coincidence with the timing of the observed type III radio bursts. Magnetic connectivity plays an important role. Only type III radio bursts reaching the local plasma line measured at 1 AU are found to be related with an associated release episode in the low corona. Other type III bursts may also have a release of NR electrons associated with them, but these electrons do not reach L1. Long release episodes appear associated with signatures of long acceleration processes in the low corona (long decay of the soft X-ray emission, type IV radio bursts, and time-extended microwave emission). Type II radio bursts are reported for most of the events and do not provide a clear discrimination between short and long release timescales. 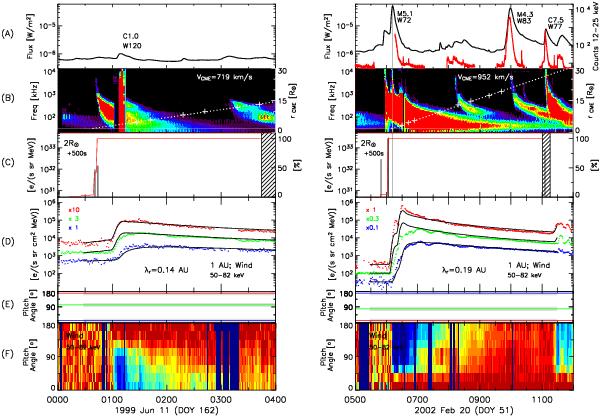