Context. The formation process of high-mass stars (with masses >8 M⊙) is still poorly understood, and represents a challenge from both the theoretical and observational points of view. The advent of the Atacama Large Millimeter Array (ALMA) is expected to provide observational evidence to better constrain the theoretical scenarios.
Aims: The present study aims at characterizing the high-mass star forming region G35.20-0.74 N, which is found associated with at least one massive outflow and contains multiple dense cores, one of them recently found associated with a Keplerian rotating disk.
Methods: We used the radio-interferometer ALMA to observe the G35.20-0.74 N region in the submillimeter continuum and line emission at 350 GHz. The observed frequency range covers tracers of dense gas (e.g., H13CO+, C17O), molecular outflows (e.g., SiO), and hot cores (e.g., CH3CN, CH3OH). These observations were complemented with infrared and centimeter data.
Results: The ALMA 870 μm continuum emission map reveals an elongated dust structure (~0.15 pc long and ~0.013 pc wide; full width at half maximum) perpendicular to the large-scale molecular outflow detected in the region, and fragmented into a number of cores with masses ~1-10 M⊙ and sizes ~1600 AU (spatial resolution ~960 AU). The cores appear regularly spaced with a separation of ~0.023 pc. The emission of dense gas tracers such as H13CO+ or C17O is extended and coincident with the dust elongated structure. The three strongest dust cores show emission of complex organic molecules characteristic of hot cores, with temperatures around 200 K, and relative abundances 0.2-2 × 10-8 for CH3CN and 0.6-5 × 10-6 for CH3OH. The two cores with highest mass (cores A and B) show coherent velocity fields, with gradients almost aligned with the dust elongated structure. Those velocity gradients are consistent with Keplerian disks rotating about central masses of 4-18 M⊙. Perpendicular to the velocity gradients we have identified a large-scale precessing jet/outflow associated with core B, and hints of an east-west jet/outflow associated with core A.
Conclusions: The elongated dust structure in G35.20-0.74 N is fragmented into a number of dense cores that may form high-mass stars. Based on the velocity field of the dense gas, the orientation of the magnetic field, and the regularly spaced fragmentation, we interpret this elongated structure as the densest part of a 1D filament fragmenting and forming high-mass stars. 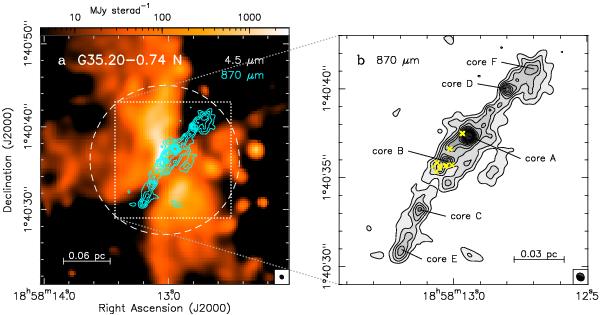