Herschel view of the large-scale structure in the dark clouds

Context. The Chamaeleon molecular cloud complex is one of the nearest star-forming sites and encompasses three molecular clouds (Cha I, II, and III) that have a different star-formation history, from quiescent (Cha III) to actively forming stars (Cha II), and one that reaches the end of star-formation (Cha I).
Aims: We aim at characterising the large-scale structure of the three sub-regions of the Chamaeleon molecular cloud complex by analysing new far-infrared images taken with the Herschel Space Observatory.
Methods: We derived column density and temperature maps using PACS and SPIRE observations from the Herschel Gould Belt Survey and applied several tools, such as filament tracing, power-spectra, ∆-variance, and probability distribution functions (PDFs) of the column density, to derive the physical properties.
Results: The column density maps reveal a different morphological appearance for each of the three clouds, with a ridge-like structure for Cha I, a clump-dominated regime for Cha II, and an intricate filamentary network for Cha III. The filament width is measured to be about 0.12 ± 0.04 pc in the three clouds, and the filaments are found to be gravitationally unstable in Cha I and II, but mostly subcritical in Cha III. Faint filaments (striations) are prominent in Cha I and are mostly aligned with the large-scale magnetic field. The PDFs of all regions show a lognormal distribution at low column densities. For higher densities, the PDF of Cha I shows a turnover indicative of an extended higher density component and culminates in a power-law tail. Cha II shows a power-law tail with a slope characteristic of gravity. The PDF of Cha III can be best fit by a single lognormal.
Conclusions: The turbulence properties of the three regions are found to be similar, pointing towards a scenario where the clouds are impacted by large-scale processes. The magnetic field might possibly play an important role for the star formation efficiency in the Chamaeleon clouds if it can be proven that it can effectively channel material onto Cha I, and possibly Cha II, but this is probably less efficient on the quiescent Cha III cloud.

Herschel is an ESA space observatory with science instruments provided by the European-led Principal Investigator consortia and with important participation from NASA. 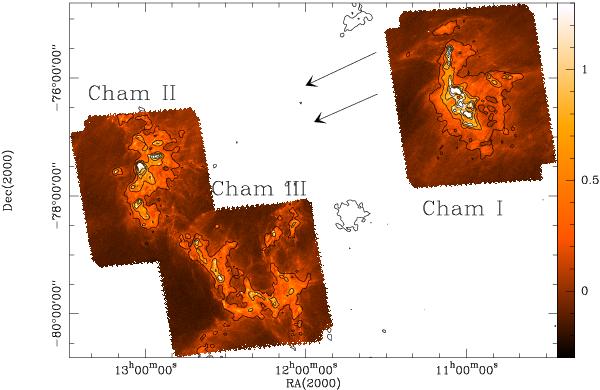