The understanding of interstellar nitrogen chemistry has improved significantly with recent results from the Herschel Space Observatory. To set even better constraints, we report here on deep searches for the NH+ ground state rotational transition J = 1.5-0.5 of the 2Π1/2 lower spin ladder, with fine-structure transitions at 1013 and 1019 GHz, and the para-NH2- 11,1-00,0 rotational transition at 934 GHz towards Sgr B2 (M) and G10.6-0.4 (W31C) using the Herschel Heterodyne Instrument for the Far-Infrared (HIFI). No clear detections of NH+ are made and the derived upper limits relative to the total number of hydrogen nuclei are ≲2 × 10-12 and ≲7 × 10-13 in the Sgr B2 (M) molecular envelope and in the G10.6-0.4 molecular cloud, respectively. The searches are, however, complicated by the fact that the 1 013 GHz transition lies only -2.5 km s-1 from a CH2NH line, which is seen in absorption in Sgr B2 (M), and that the hyperfine structure components in the 1019 GHz transition are spread over 134 km s-1. Searches for the so far undetected NH2- anion turned out to be unfruitful towards G10.6-0.4, while the para-NH2- 11,1-00,0 transition was tentatively detected towards Sgr B2 (M) at a velocity of 19 km s-1. Assuming that the absorption occurs at the nominal source velocity of +64 km s-1, the rest frequency would be 933.996 GHz, offset by 141 MHz from our estimated value. Using this feature as an upper limit, we found N(p-NH2-) ≲4 × 1011 cm-2, which implies an abundance of ≲8 × 10-13 in the Sgr B2 (M) molecular envelope. The upper limits for both species in the diffuse line-of-sight gas are less than 0.1 to 2% of the values found for NH, NH2, and NH3 towards both sources, and the abundance limits are ≲2-4 × 10-11. An updated pseudo time-dependent chemical model with constant physical conditions, including both gas-phase and surface chemistry, predicts an NH+ abundance a few times lower than our present upper limits in diffuse gas and under typical Sgr B2 (M) envelope conditions. The NH2- abundance is predicted to be several orders of magnitudes lower than our observed limits, hence not supporting our tentative detection. Thus, while NH2- may be very difficult to detect in interstellar space, it could, on the other hand, be possible to detect NH+ in regions where theionisation rates of H2 and N are greatly enhanced.

Herschel is an ESA space observatory with science instruments provided by European-led Principal Investigator consortia and with important participation from NASA.Appendices are available in electronic form at http://www.aanda.org 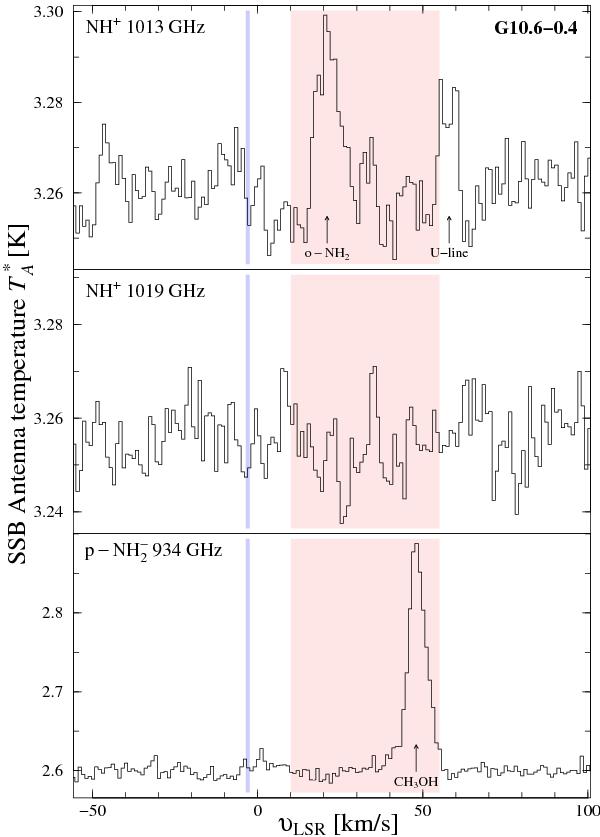