Context. This work is part of a long-term spectroscopic study of a sample of 30 multiple stars with early-type components. In this second paper we present the results for six multiple systems in which new stellar components have been detected.
Aims: The main aim is to increase the knowledge of stellar properties and dynamical structure of early-type multiple stellar systems.
Methods: Using spectroscopic observations taken over a time baseline of more than five years we measured radial velocities by cross-correlations and spectrally separated the double-lined systems. In addition to the discovery of objects with double-lined spectra, the existence of new spectroscopic subsystems were inferred from the radial velocity variations of single-lined components and through the variation of the barycentric velocity of double-lined subsystems. Orbital elements were calculated when possible.
Results: Seven new stellar components and two members that we expect to confirm with new observations have been discovered in the six studied multiples. We present orbital parameters for two double-lined binaries and preliminary orbits for three single-lined spectroscopic binaries. Five of the six analysed systems are quadruples, while the remaining has five components distributed on four hierarchical levels. These multiplicity orders are in fact lower limits, since these systems lack high-resolution visual observations and additional hierarchical levels might exist in that separation range.
Conclusions: The six analysed systems have a higher degree of multiplicity and a more complex hierarchical structure than previously known, which suggests that high-order multiple systems are significantly more frequent than currently estimated. The long-term spectroscopic monitoring of multiple systems has shown to be useful for the detection of companions in intermediate hierarchical levels. 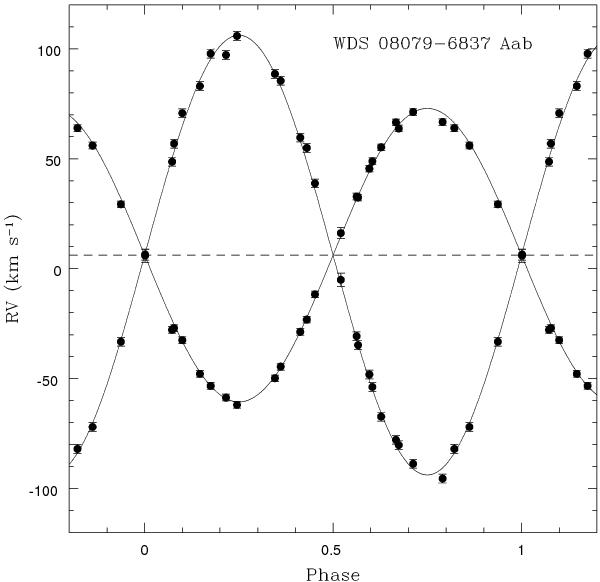