A comprehensive view of the Virgo stellar stream

To explore the complex halo substructure that has been reported in the direction of the Virgo constellation, radial velocities and metallicities have been measured for 82 RR Lyrae stars (RRLS) that were identified by the QUEST survey. These stars are distributed over 90 square degrees of the sky, and lie from 4 to 23 kpc from the Sun. Using an algorithm for finding groups in phase space and modeling the smooth halo component in the region, we identified the 5 most significant RRLS groups, some of which were previously known or suspected. We have examined the SEKBO and the Catalina catalog of RRLS (with available spectroscopic measurements), as well as the bright QUEST RRLS sample, the catalog of Red Giant stars from the Spaghetti survey, and three recent catalogs of blue horizontal branch (BHB) stars, for stars that may be related to the QUEST RRLS groups. The most significant group of RRLS is the Virgo stellar stream (VSS) identified here as group A, which is composed of at least 10 RRLS and 3 BHB stars. It has a mean distance of 19.6 kpc and a mean radial velocity Vgsr = 128 km s-1, as estimated from its RRLS members. With the revised velocities reported here, there is no longer an offset in velocity between the RRLS in the VSS and the prominent peak in the velocities of main-sequence turnoff stars reported by other researchers in the same direction and at a similar distance (known as S297+63-20.5). The location in phase space of two other groups (F and H) suggests a possible connection with the VSS, which cannot be discarded at this point, although the turnoff colors of the VSS and group H, as identified from other works, suggest they might be composed of different populations. Two more groups, B and D, are found at mean distances of 19.0 and 5.7 kpc, and mean radial velocities of Vgsr = -94 and 32 km s-1. The latter is the more numerous in terms of total members, as well as the more extended in RA. A comparison with the latest model of the disruption of the Sagittarius dwarf, indicates that none of the above groups is related to it. Rather than being the result of a single accretion event, the excess of stars observed in Virgo appears to be composed of several halo substructures along the same line of sight. 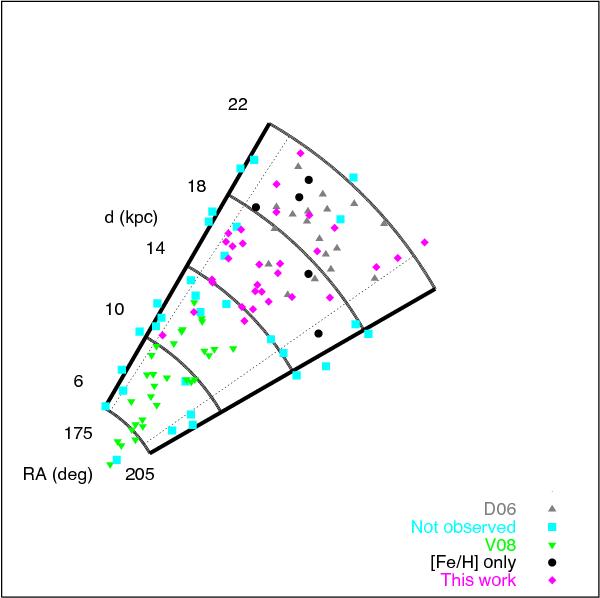