Context. The cataclysmic variable V893 Sco is an eclipsing dwarf nova which, apart from outbursts with comparatively low amplitudes, exhibits a particularly strong variability during quiescence on timescales of days to seconds.
Aims: The present study aims to update the outdated orbital ephemerides published previously, to investigate deviations from linear ephemerides, and to characterize non-random brightness variations in a range of timescales.
Methods: Light curves of V893 Sco were observed on 40 nights, spanning a total time base of about 14 years. They contain 114 eclipses which were used to significantly improve the precision of the orbital period and to study long-term variations of the time of revolution. Oscillations and similar brightness variations were studied with Fourier techniques in the individual light curves.
Results: The orbital period exhibits long-term variations with a cycle time of 10.2 years. They can be interpreted as a light travel time effect caused by the presence of a giant planet with approximately 9.5 Jupiter masses in a 4.5 AU orbit around V893 Sco. On some nights transient semi-periodic variations on timescales of several minutes can be seen which may be identified as quasi-periodic oscillations. However, it is difficult to distinguish whether they are caused by real physical mechanisms or if they are the effect of an accidental superposition of unrelated flickering flares. Simulations to investigate this question are presented. 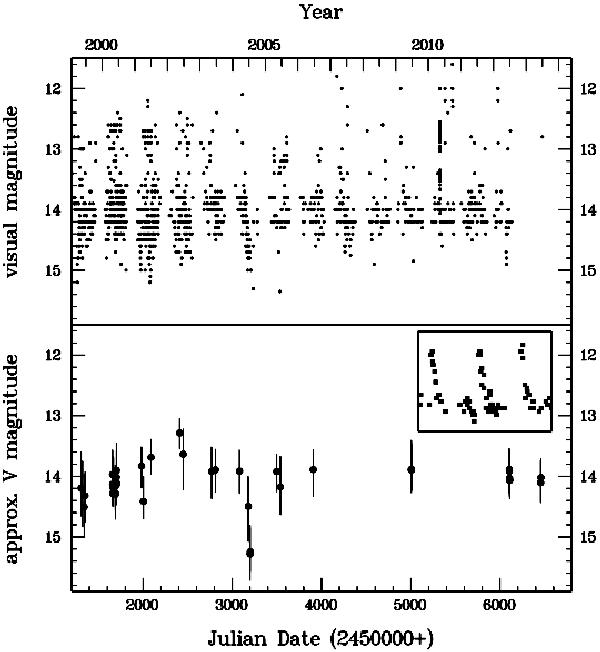