The frequency of planetary debris around young white dwarfs

Context. Heavy metals in the atmospheres of white dwarfs are thought in many cases to be accreted from a circumstellar debris disk, which was formed by the tidal disruption of a rocky planetary body within the Roche radius of the star. The abundance analysis of photospheric elements and conclusions about the chemical composition of the accreted matter are a new and promising method of studying the composition of extrasolar planetary systems. However, ground-based searches for metal-polluted white dwarfs that rely primarily on the detection of the Ca ii K line become insensitive at Teff > 15 000 K because this ionization state depopulates.
Aims: We present the results of the first unbiased survey for metal pollution among hydrogen-atmosphere (DA type) white dwarfs with cooling ages in the range 20-200 Myr and 17 000 K <Teff < 27 000 K.
Methods: The sample was observed with the Cosmic Origins Spectrograph on board the Hubble Space Telescope in the far ultraviolet range between 1130 and 1435 Å. The atmospheric parameters were obtained using these spectra and optical observations from the literature. Element abundances were determined using theoretical models, which include the effects of element stratification due to gravitational settling and radiative levitation.
Results: We find 48 of the 85 DA white dwarfs studied, or 56% show traces of heavy elements. In 25 stars (showing only Si and occasionally C), the elements can be explained by radiative levitation alone, although we argue that accretion has very likely occurred recently. The remaining 23 white dwarfs (27%), however, must be currently accreting. Together with previous studies from the ground and adopting bulk Earth abundances for the debris, accretion rates range from a few 105 g s-1 to a few 108 g s-1, with no evident trend in cooling age from ≈40 Myr to ≈2 Gyr. Only a single, modest case of metal pollution (Ṁ < 106 g s-1) is found among ten white dwarfs with Teff > 23 000 K, in excellent agreement with the absence of infrared excess from dust around these warmer stars. The median, main sequence progenitor of our sample corresponds to an A-type star of ≈2 M⊙, and we find 13 of 23 white dwarfs descending from main sequence 2-3 M⊙, late B- and A-type stars to be currently accreting. Only one of 14 targets with Mwd > 0.8 M⊙ is found to be currently accreting, which suggests a large fraction of these stars result from double-degenerate mergers, and the merger disks do not commonly reform large planetesimals or otherwise pollute the remnant. We reconfirm our previous finding that two 625 Myr Hyades white dwarfs are currently accreting rocky planetary debris.
Conclusions: At least 27% of all white dwarfs with cooling ages 20-200 Myr are accreting planetary debris, but that fraction could be as high as ≈50%. At Teff > 23 000 K, the luminosity of white dwarfs is probably sufficient to vaporize circumstellar dust grains, so no stars with strong metal-pollution are found. Planetesimal disruption events should occur in this cooling age and temperature range as well, and they are likely to result in short phases of high mass-transfer rates. It appears that the formation of rocky planetary material is common around 2-3 M⊙ late B- and A-type stars. 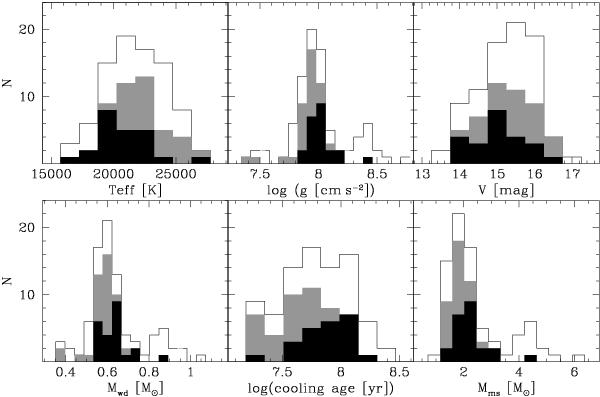