Context. Supernovae (SNe) offer a unique opportunity to study physical properties, small-scale structure, and complex organic chemistry of the interstellar medium (ISM) in different galaxies.
Aims: Interstellar absorption features, such as atomic and molecular lines as well as diffuse interstellar bands (DIBs), can be used to study the physical properties of extra-galactic diffuse interstellar clouds.
Methods: We used optical high-resolution spectroscopy to study the properties of the ISM in the SN 2008fp host galaxy, ESO 428-G14. The properties of intervening dust were investigated via spectropolarimetry.
Results: The spectra of SN 2008fp reveal a complex of diffuse atomic clouds at radial velocities in line with the systematic velocities of the host galaxy. In addition, a translucent (AV ~ 1.5 mag) cloud is detected at a heliocentric velocity of 1770 km s-1 (redshifted by 70 km s-1 with respect to the system velocity). This cold dense cloud is rich in dense atomic gas tracers, molecules, as well as DIBs. We have detected both C2 and C3 for the first time in a galaxy beyond the Local Group. The CN (0, 0) band-line ratios are consistent with an excitation temperature of T = 2.9 ± 0.4 K. The interstellar polarisation law deviates significantly from what is observed in the Galaxy, indicating substantial differences in the host dust/size composition. No variations over a period of about one month are observed in any of the ISM tracers.
Conclusions: The lack of variability in the extra-galactic absorption line profiles implies that the absorbing material is not circumstellar and thus not directly affected by the SN event. It also shows that there are no significant density variation in the small-scale structure of the molecular cloud down to 100 AU. C2 is used to probe the cold diffuse ISM density and temperature. Here we also use observations of CN in a distant galaxies, though for now still in a limited way, for in situ measurements of the cosmic background radiation temperature. 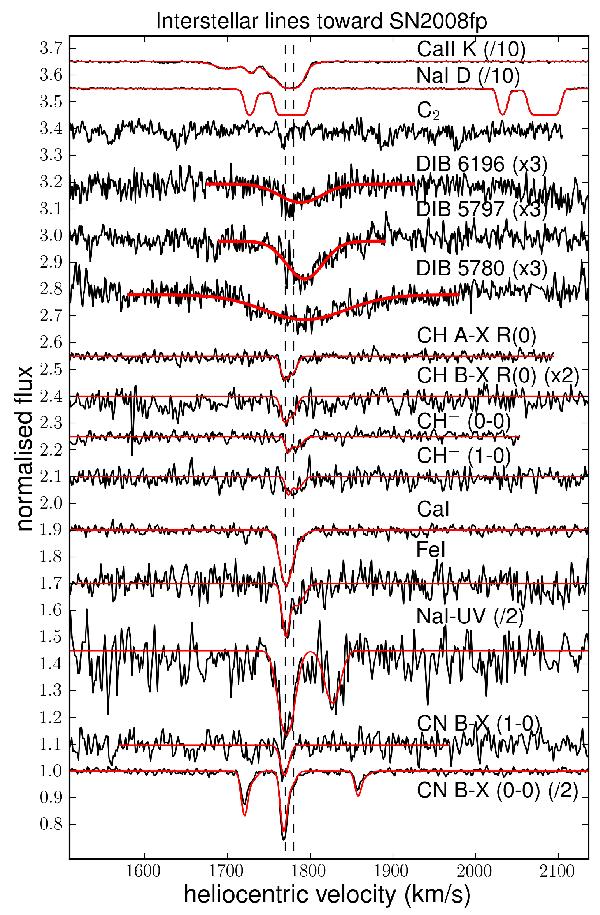