We present molecular observations carried out with the IRAM 30 m telescope at wavelengths around 1.15 mm towards the Oort cloud comets C/2012 S1 (ISON) and C/2013 R1 (Lovejoy) when they were at ~0.6 and ~1 au, respectively, from the Sun. We detect HCN, HNC, and CH3OH in both comets, together with the ion HCO+ in comet ISON and a few weak unidentified lines in comet Lovejoy, one of which might be assigned to methylamine (CH3NH2). The monitoring of the HCN J = 3-2 line showed a tenfold enhancement in comet ISON on November 14.4 UT due to an outburst of activity whose exact origin is unknown, although it might be related to some break-up of the nucleus. The set of CH3OH lines observed was used to derive the kinetic temperature in the coma, 90 K in comet ISON and 60 K in comet Lovejoy. The HNC/HCN ratios derived, 0.18 in ISON and 0.05 in Lovejoy, are similar to those found in most previous comets and are consistent with an enhancement of HNC as the comet approaches the Sun. Phosphine (PH3) was also searched for unsuccessfully in both comets through its fundamental 10-00 transition, and 3σ upper limits corresponding to PH3/H2O ratios 4-10 times above the solar P/O elemental ratio were derived. 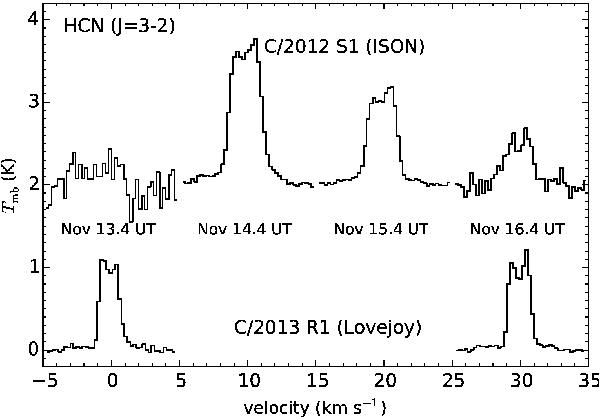