The K-type binary star HD 102077 was proposed as a candidate member of the TW Hydrae association (TWA) which is a young (5-15 Myr) moving group in close proximity (~50 pc) to the solar system. The aim of this work is to verify this hypothesis by different means. We first combine diffraction-limited observations from the ESO NTT 3.5 m telescope in SDSS-i' and SDSS-z' passbands (three epochs) and ESO 3.6 m telescope in H-band (one epoch) with literature data to obtain a new, amended orbit fit of the visual binary. We then estimate the spectral types of both components from the i' - z' colours and reanalyse the Hipparcos parallax and proper motion taking the orbital motion into account. Moreover, we use two high-resolution spectra of HD 102077 obtained with the fibre-fed optical echelle spectrograph FEROS at the MPG/ESO 2.2 m telescope to determine the radial velocity and the lithium equivalent width (EW) of the system. Finally, we use all the information to discuss the kinematic properties of HD 102077 and to estimate the age of the system. The orbital elements of the HD 102077 trajectory are well constrained and we derive a total system mass of 2.6 ± 0.8 M⊙ and a semi-major axis of 14.9 ± 1.6 AU. From the i' - z' colours we infer an integrated spectral type of K2V, and individual spectral types of K0 ± 1 and K5 ± 1 for primary and secondary, respectively. The radial velocity corrected for the orbital motion of the system is 17.6 ± 2 km s-1. Even though the parallax determination from the Hipparcos data is not influenced by the orbital motion, the proper motion changes to μα ∗ cosδ = -137.84 ± 1.26 mas yr-1 and μδ = -33.53 ± 1.45 mas yr-1. With the resultant space motion, the probability of HD 102077 being a member of TWA is less than 1%. Furthermore, the lithium equivalent width of 200 ± 4 mÅ is consistent with an age between 30 Myr and 120 Myr and thus older than the predicted age of TWA. The comparison of HD 102077's temperature and luminosity to isochrones supports this result. In conclusion, HD 102077's age, galactic space motion, and position do not fit TWA or any other young moving group. 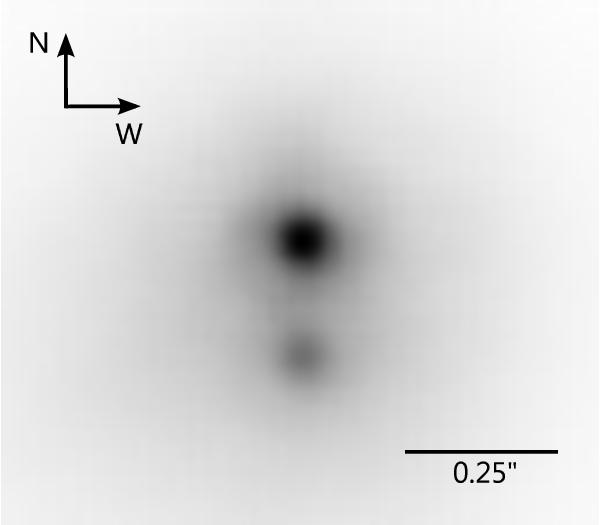