A remarkable recurrent nova in M 31: The X-ray observations

Context. Another outburst of the recurrent M 31 nova M31N 2008-12a was announced in late November 2013. Optical data suggest an unprecedentedly short recurrence time of approximately one year.
Aims: In this Letter we address the X-ray properties of M31N 2008-12a.
Methods: We requested Swift monitoring observations shortly after the optical discovery. We estimated source count rates and extracted X-ray spectra from the resulting data. The corresponding ultraviolet (UV) data were also analysed.
Results: The nova M31N 2008-12a was clearly detected as a bright supersoft X-ray source (SSS) only six days after the well-constrained optical discovery. It displayed a short SSS phase of two weeks' duration and an exceptionally hot X-ray spectrum with an effective black-body temperature of ~97 eV. During the SSS phase the X-ray light curve displayed significant variability that might have been accompanied by spectral variations. The very early X-ray variability was found to be anti-correlated with simultaneous variations in the UV flux.
Conclusions: The X-ray properties of M31N 2008-12a coherently point towards a high-mass white dwarf in the nova system. This object might be a promising Type Ia supernova progenitor. We rediscovered additional X-ray detections of M31N 2008-12a that are consistent with our data and increase the number of known nova outbursts to seven. This nova is an exceptional object that merits further attention in the future.

Tables 1 and 2 are available in electronic form at http://www.aanda.org 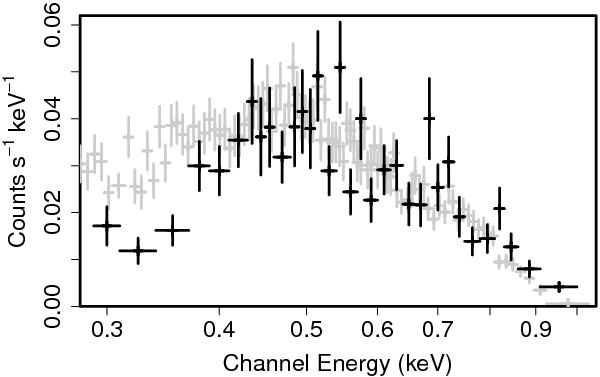