For a rotating galaxy, the inner circular-velocity gradient dRV(0) provides a direct estimate of the central dynamical mass density, including gas, stars, and dark matter. We consider 60 low-mass galaxies with high-quality H I and/or stellar rotation curves (including starbursting dwarfs, irregulars, and spheroidals), and estimate dRV(0) as VRd/Rd, where Rd is the galaxy scale length. For gas-rich dwarfs, we find that VRd/Rd correlates with the central surface brightness μ0, the mean atomic gas surface density Σgas, and the star formation rate surface density ΣSFR. Starbursting galaxies, such as blue compact dwarfs (BCDs), generally have higher values of VRd/Rd than dwarf irregulars, suggesting that the starburst is closely related to the inner shape of the potential well. There are, however, some "compact" irregulars with values of VRd/Rd similar to BCDs. Unless a redistribution of mass takes place, BCDs must evolve into compact irregulars. Rotating spheroidals in the Virgo cluster follow the same correlation between VRd/Rd and μ0 as gas-rich dwarfs. They have values of VRd/Rd comparable to those of BCDs and compact irregulars, pointing to evolutionary links between these types of dwarfs. Finally, we find that, as for spiral galaxies and massive starbursts, the star-formation activity in dwarfs can be parametrized as ΣSFR = ɛ Σgas/τorb, where τorb is the orbital time and ɛ ≃ 0.02. 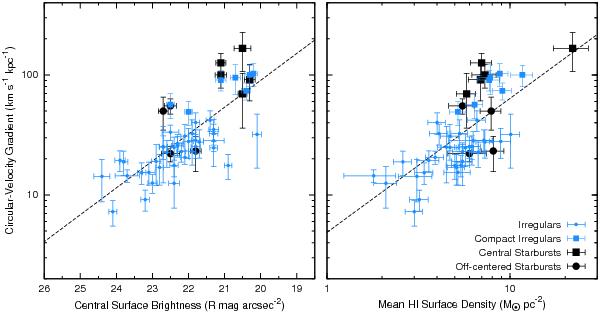