Aims: () is a Li-rich, rapidly rotating single K giant. We set out to study the spot configuration and activity level by calculating surface temperature maps of the star.
Methods: We apply the Doppler imaging method on high-resolution optical spectroscopy obtained during 2004-2006.
Results: In July-August 2004, no clear spot structures were visible, but the spot coverage increased in July 2005, and cool spots emerged, especially at intermediate latitudes. Later on in September 2006, the spot coverage increased and cool spots were visible on both sides of the equator. However, the map of 2006 suffers from bad phase coverage, meaning it is not possible to draw definite conclusions on the spot locations during that season.
Conclusions: Compared with earlier Doppler maps of DI Psc and temperature maps obtained for other late-type stars with similar rotation rates, DI Psc seems to be in a low activity state especially during the observing season of July-August 2004. During the 2005 and 2006 observing seasons, the spot activity seen in the spectral line profiles and inferred from Doppler images increases, and the temperature contrast in our last map is more comparable to what was reported in an earlier study. Therefore, it can be concluded that the spot activity level of the star is variable over time. However, the present and previous Doppler images form too short a time series to draw conclusions about a possible activity cycle in DI Psc.

Based on observations made with the Nordic Optical Telescope, operated on the island of La Palma jointly by Denmark, Finland, Iceland, Norway, and Sweden in the Spanish Observatorio del Roque de los Muchachos of the Instituto de Astrofísica de Canarias. 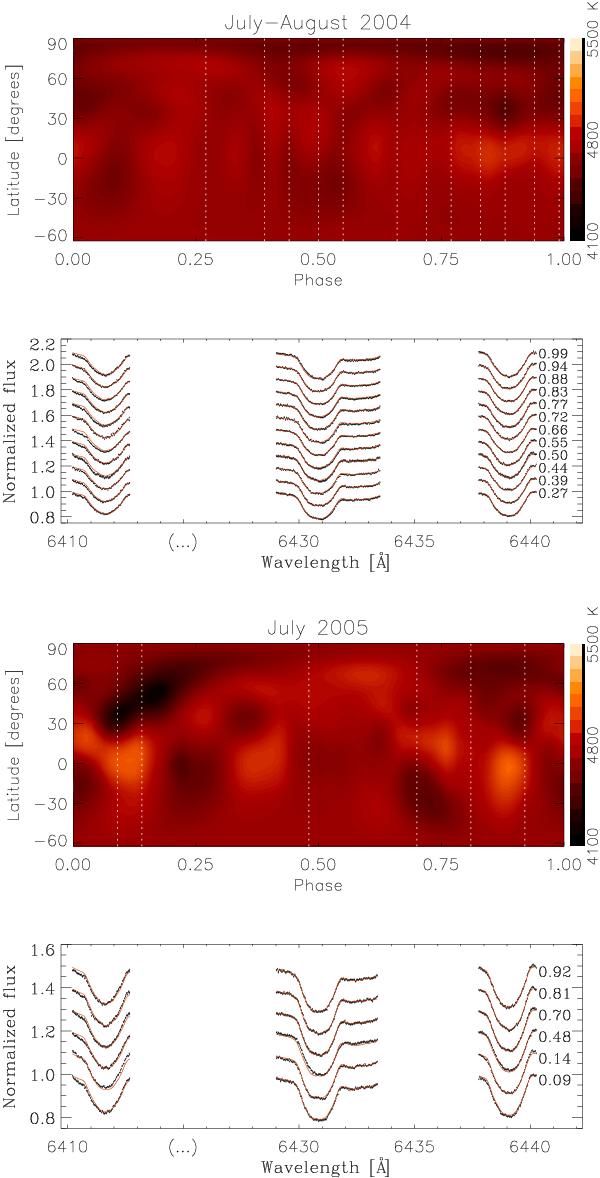