The IACOB project. I. Rotational velocities in northern Galactic O- and early B-type stars revisited. The impact of other sources of line-broadening

Context. Stellar rotation is an important parameter in the evolution of massive stars. Accurate and reliable measurements of projected rotational velocities in large samples of OB stars are crucial to confront the predictions of stellar evolutionary models with observational constraints.
Aims: We reassess previous determinations of projected rotational velocities (v sin i) in Galactic OB stars using a large, high-quality spectroscopic dataset and a strategy that accounts for other sources of line-broadening in addition to rotation.
Methods: We present a versatile and user-friendly IDL tool - based on a combined Fourier transform (FT) + goodness-of-fit (GOF) methodology - for the line-broadening characterization in OB-type stars. We used this tool to (a) investigate the impact of macroturbulent and microturbulent broadenings on v sin i measurements, and (b) determine v sin i and the size of the macroturbulent broadening (vm) in a sample of ~200 Galactic OB-type stars.
Results: We present observational evidence that illustrates the strengths and limitations of the proposed FT+GOF methodology for OB stars. We confirm previous statements (that were based on indirect arguments or smaller samples) that the macroturbulent broadening is ubiquitous in the massive-star domain. We compare the newly derived v sin i for O stars and early-B supergiants and giants (where the effect of macroturbulence was found to be stronger) with previous determinations that did not account for this additional line-broadening contribution, and show that cases with v sin i≤ 120 km s-1need to be systematically revised downward by ~25 (±20) km s-1. We suggest that microturbulence may impose an upper limit below which v sin i and vm may be incorrectly derived by means of the proposed methodology as it is currently used, and discuss the implications of this statement on the study of relatively narrow-line massive stars.
Conclusions: An investigation of the impact of the revised v sin i distributions on the predictions of massive star evolutionary models is now warranted. The reliability of v sin i measurements in the low v sin i regime, using a more precise description of the intrinsic profiles that are employed for the line-broadening analysis, also needs to be investigated in more detail.

Based on observations made with the Nordic Optical Telescope, operated on the island of La Palma jointly by Denmark, Finland, Iceland, Norway, and Sweden, in the Spanish Observatorio del Roque de los Muchachos of the Instituto de Astrofísica de Canarias.Appendix A is available in electronic form at http://www.aanda.org 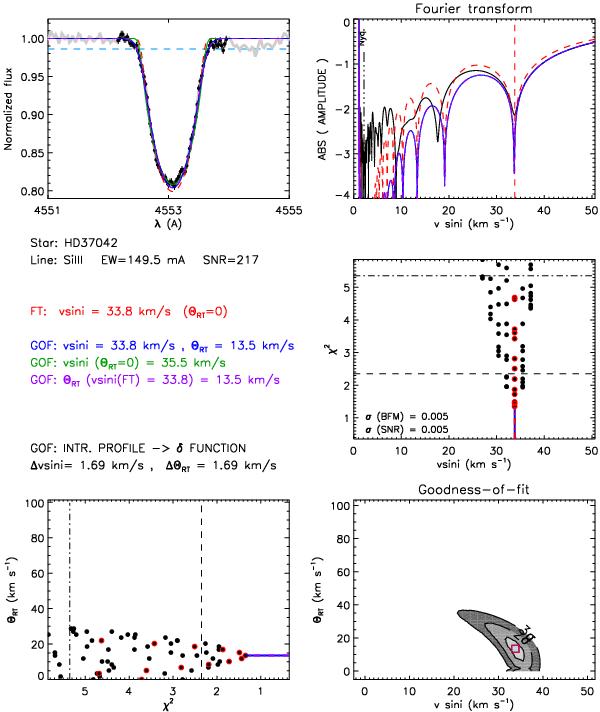