Context. The recent discovery of three giant planets orbiting the extremely metal-poor stars HIP 11952 and HIP 13044 have challenged theoretical predictions of the core-accretion model. According to this, the metal content of the protoplanetary disk from which giant planets are formed is a key ingredient for the early formation of planetesimals prior to the runaway accretion of the surrounding gas.
Aims: We reanalyzed the original FEROS data that were used to detect the planets to prove or refute their existence, employing our new reduction and analysis methods.
Methods: We applied the cross-correlation technique to FEROS spectra to measure the radial velocity variation of HIP 13044 and HIP 11952. We reached a typical precision of ~35 m s-1 for HIP 13044 and ~25 m s-1 for HIP 11952, which is significantly superior to the uncertainties presented previously.
Results: We found no evidence of the planet orbiting the metal-poor extragalactic star HIP 13044. We show that given our radial velocity precision, and considering the large number of radial velocity epochs, the probability for a non-detection of the radial velocity signal recently claimed is lower than 10-4. Finally, we also confirm findings that the extremely metal-poor star HIP 11952 does not contain a system of two gas giant planets. These results reaffirm the expectations from the core-accretion model of planet formation.

Based on data obtained from the ESO Science Archive Facility. 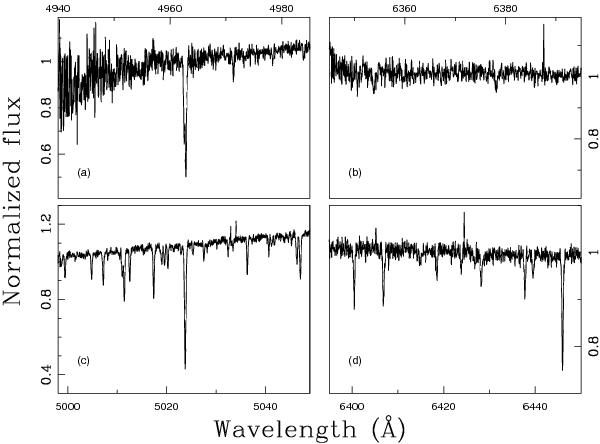