The RAVE survey: the Galactic escape speed and the mass of the Milky Way

We made new estimates of the Galactic escape speed at various Galactocentric radii using the latest data release of the RAdial Velocity Experiment (RAVE DR4). Compared to previous studies we have a database that is larger by a factor of 10, as well as reliable distance estimates for almost all stars. Our analysis is based on statistical analysis of a rigorously selected sample of 90 high-velocity halo stars from RAVE and a previously published data set. We calibrated and extensively tested our method using a suite of cosmological simulations of the formation of Milky Way-sized galaxies. Our best estimate of the local Galactic escape speed, which we define as the minimum speed required to reach three virial radii R340, is 533+54-41 km s-1 (90% confidence), with an additional 4% systematic uncertainty, where R340 is the Galactocentric radius encompassing a mean overdensity of 340 times the critical density for closure in the Universe. From the escape speed we further derived estimates of the mass of the Galaxy using a simple mass model with two options for the mass profile of the dark matter halo: an unaltered and an adiabatically contracted Navarro, Frenk & White (NFW) sphere. If we fix the local circular velocity, the latter profile yields a significantly higher mass than the uncontracted halo, but if we instead use the statistics for halo concentration parameters in large cosmological simulations as a constraint, we find very similar masses for both models. Our best estimate for M340, the mass interiorto R340 (dark matter and baryons), is 1.3+0.4-0.3 × 1012 M⊙ (corresponds to M200 = 1.6+0.5-0.4 × 1012 M⊙). This estimate is in good agreement with recently published, independent mass estimates based on the kinematics of more distant halo stars and the satellite galaxy Leo I. 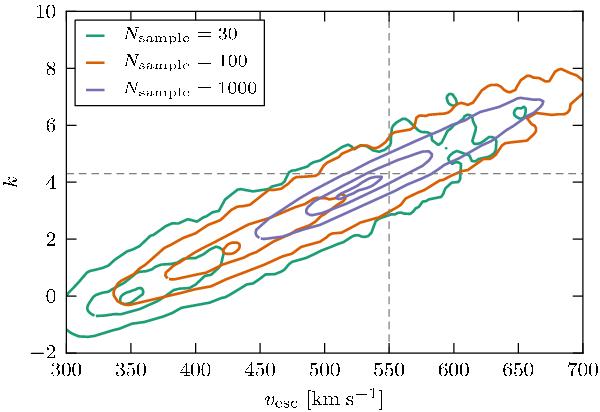