Aims: The distribution of OB stars along with Hα, 12CO, dust infrared emission, and neutral hydrogen is carried out to provide a more complete picture of interactions of the young massive stars and the observed supershell GSH 305+01-24.
Methods: The studied field is located between 299° ≤ l ≤ 311° and -5° ≤ b ≤ 7°. The investigation is based on nearly 700 O-B9 stars with currently available uvbyβ photometry. The derived stellar physical parameters were used to establish a homogeneous scale for the distances and extinction of light for major apparent groups and layers of foreground and background stars in Centaurus and to study the interaction with the surrounding interstellar medium.
Results: The distance to the entire Centaurus star-forming complex is revised, and a maximum of the OB-star distance distribution is found at 1.8 ± 0.4 (rms) kpc. The massive star component of GSH 305+01-24 is identified at about 85-90% completeness up to 11.5-12 mag. The projected coincidence of the OB stars with the shell and the similarities between the shell's morphology and the OB-star distribution indicate a strong interaction of the stellar winds with the superbubble material. We demonstrate that these stars contribute enough wind injection energy to explain the observed size and expansion velocity of the supershell. The derived stellar ages suggest an age gradient over the Coalsack Loop. Continuous star formation might be taking place within the shell with the youngest stars located toward its periphery, and the open cluster NGC 4755 is the oldest. A layer of very young stars at 1 kpc is detected, and its connection to both GSH 305+01-24 and the foreground GSH 304-00-12 H i shells is investigated. 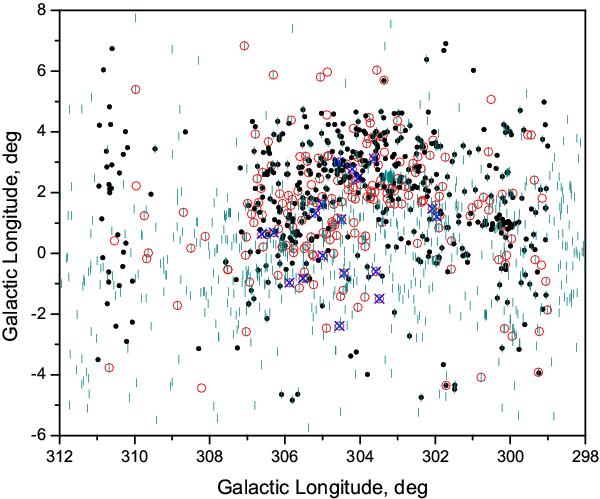