The spectroscopic evolution of the recurrent nova T Pyxidis during its 2011 outburst. III. The ultraviolet development from iron curtain through the post-X-ray turnoff

We continue the analysis of the multiwavelength evolution of the recurrent nova T Pyx during its 2011 outburst, focussing on the spectral development on the 1150-3000 Å region. This extraordinary data set presents the longest temporal baseline high resolution view of the ultraviolet for any nova to date (classical or recurrent). The observations cover the early Fe-curtain stage, when the UV was completely optically thick, to 834 days after discovery when the outburst was effectively over. We present an analysis of dynamics and abundances of the interstellar species whose resonance lines are accessible in the UV. The Lyα profile is consistent with only interstellar absorption at all epochs and agrees with the H I 21 cm column density. The distance obtained to T Pyx is about 5 kpc, based on the ISM analysis. For the ejecta evolution we have been able to follow the changes in ionization and structure with previously unobtained resolution and cadence. The excited state isoelectronic transitions of C III, N IV], and O V displayed the same detached absorption lines as the optical He I transitions during the optical maximum. This is explained as resonance absorption within the ejecta of FUV ground state lines from the 300-1000 Å range. The resonance lines of all species showed absorption components between -1000 and -3000 km s-1 as soon as the Fe-curtain turned transparent (from day 105); these persisted at the same velocities and varied in strength from one ion to another through day 834. The last ultraviolet spectrum, taken more than 800 days after outburst, showed the same absorption lines on N V and C IV as day 105. There was no evidence of circumstellar absorbers. This and the related observations of profile evolution effectively rule out any wind model for the spectrum. The picture that emerges is of ejecta that became optically thin after visual maximum as the X-ray emission became visible following an outwardly propagating ionization front and for which the ionization stages froze because of ejecta expansion after the end of the soft X-ray illumination. 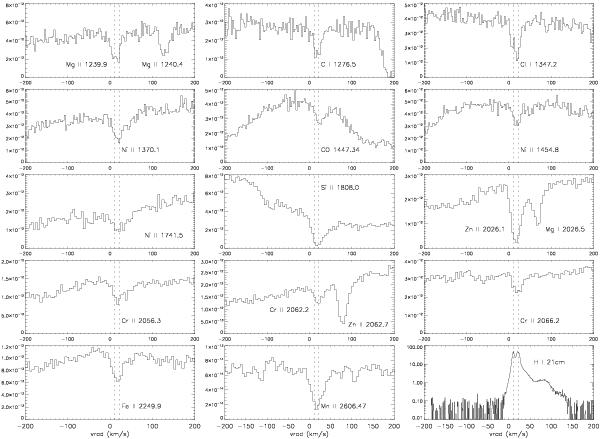