We present the first Public Data Release (PDR-1) of the VIMOS Public Extragalactic Survey (VIPERS). It comprises 57 204 spectroscopic measurements together with all additional information necessary for optimal scientific exploitation of the data, in particular the associated photometric measurements and quantification of the photometric and survey completeness. VIPERS is an ESO Large Programme designed to build a spectroscopic sample of ≃100 000 galaxies with iAB < 22.5 and 0.5 < z < 1.2 with high sampling rate (≃45%). The survey spectroscopic targets are selected from the CFHTLS-Wide five-band catalogues in the W1 and W4 fields. The final survey will cover a total area of nearly 24 deg2, for a total comoving volume between z = 0.5 and 1.2 of ≃4 × 107 h-3 Mpc3 and a median galaxy redshift of z ≃ 0.8. The release presented in this paper includes data from virtually the entire W4 field and nearly half of the W1 area, thus representing 64% of the final dataset. We provide a detailed description of sample selection, observations and data reduction procedures; we summarise the global properties of the spectroscopic catalogue and explain the associated data products and their use, and provide all the details for accessing the data through the survey database (<ext-link ext-link-type="uri" xlink:href="http://vipers.inaf.it">http://vipers.inaf.it</ext-link>) where all information can be queried interactively.

Based on observations collected at the European Southern Observatory, Cerro Paranal, Chile, using the Very Large Telescope under programs 182.A-0886 and partly 070.A-9007. Also based on observations obtained with MegaPrime/MegaCam, a joint project of CFHT and CEA/DAPNIA, at the Canada-France-Hawaii Telescope (CFHT), which is operated by the National Research Council (NRC) of Canada, the Institut National des Sciences de l'Univers of the Centre National de la Recherche Scientifique (CNRS) of France, and the University of Hawaii. This work is based in part on data products produced at TERAPIX and the Canadian Astronomy Data Centre as part of the Canada-France-Hawaii Telescope Legacy Survey, a collaborative project of NRC and CNRS. The VIPERS web site is http://vipers.inaf.it/ 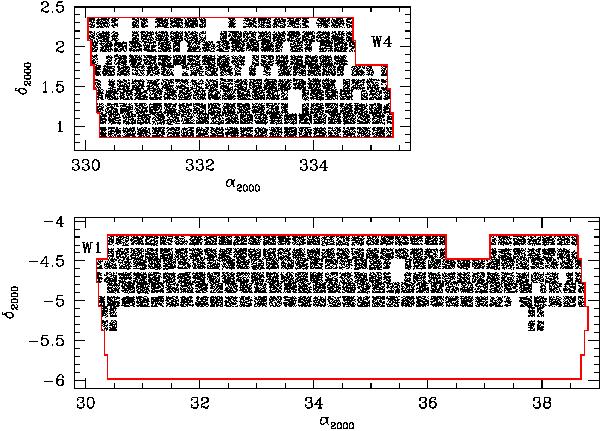