Context. Multi-wavelength, optical to IR/submm observations of strongly lensed galaxies identified by the Herschel Lensing Survey are used to determine the physical properties of high-redshift star-forming galaxies close to or below the detection limits of blank fields.
Aims: We aim to constrain theIR stellar and dust content, and to determine star formation rates and histories, dust attenuation and extinction laws, and other related properties.
Methods: We studied a sample of seven galaxies with spectroscopic redshifts z ~ 1.5-3 that have been detected with precision thanks to gravitational lensing, and whose spectral energy distribution (SED) has been determined from the rest-frame UV to the IR/mm domain. For comparison, our sample includes two previously well-studied lensed galaxies, MS1512-cB58 and the Cosmic Eye, for which we also provide updated Herschel measurements. We performed SED fits of the full photometry of each object, and of the optical and infrared parts separately, exploring various star formation histories, using different extinction laws, and exploring the effects of nebular emission. The IR luminosity, in particular, is predicted consistently from the stellar population model. The IR observations and emission line measurements, where available, are used as a posteriori constraints on the models. We also explored energy conserving models, that we created by using the observed IR/UV ratio to estimate the extinction.
Results: Among the models we have tested, models with exponentially declining star-forming histories including nebular emission and assuming the Calzetti attenuation law best fit most of the observables. Models assuming constant or rising star formation histories predict in most cases too much IR luminosity. The SMC extinction law underpredicts the IR luminosity in most cases, except for two out of seven galaxies, where we cannot distinguish between different extinction laws. Our sample has a median lensing-corrected IR luminosity ~3 × 1011L⊙, stellar masses between 2 × 109M⊙ and 2 × 1011M⊙, and IR/UV luminosity ratios spanning a wide range. The dust masses of our galaxies are in the range [2-17] × 107M⊙, extending previous studies at the same redshift down to lower masses. We do not find any particular trend of the dust temperature Tdust with LIR, suggesting an overall warmer dust regime at our redshift regardless of IR luminosity.
Conclusions: Gravitational lensing enables us to study the detailed physical properties of individual IR-detected z ~ 1.5-3 galaxies up to a factor of ~10 fainter than achieved with deep blank field observations. We have in particular demonstrated that multi-wavelength observations combining stellar and dust emission can constrain star formation histories and extinction laws of star-forming galaxies, as proposed in an earlier paper. Fixing the extinction based on the IR/UV observations successfully breaks the age-extinction degeneracy often encountered in obscured galaxies. 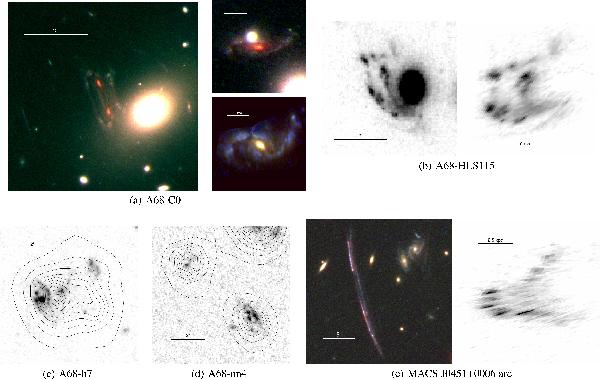