Context. Classical T Tauri stars (CTTSs) are young, accreting low-mass stars; their X-ray emission differs from that of their main-sequence counterparts in a number of aspects.
Aims: We study the specific case of DN Tau, a young M0-type accreting CTTS, to extend the range of young CTTSs studied with high-resolution X-ray spectroscopy at lower masses and to compare its high-energy properties with those of similar objects.
Methods: We use a deep XMM-Newton observation of DN Tau to investigate its X-ray properties and X-ray generating mechanisms. Specifically, we examine the presence of X-ray emission from magnetic activity and accretion shocks. We also compare our new X-ray data with UV data taken simultaneously and with X-ray/UV observations performed before.
Results: We find that the X-ray emission from DN Tau is dominated by coronal plasma generated via magnetic activity, but also clearly detect a contribution of the accretion shocks to the cool plasma component at ≲2 MK as consistently inferred from density and temperature analysis. Typical phenomena of active coronae, such as flaring, the presence of very hot plasma at 30 MK, and an abundance pattern showing the inverse FIP effect, are seen on DN Tau. Strong variations in the emission measure of the cooler plasma components between the 2005 and 2010 data point to accretion related changes; in contrast, the hotter coronal plasma component is virtually unchanged. The UV light curve taken simultaneously is in general not related to the X-ray brightness, but exhibits clear counterparts during the observed X-ray flares.
Conclusions: The X-ray properties of DN Tau are similar to those of more massive CTTSs, but its low mass and large radius associated with its youth shift the accretion shocks to lower temperatures, reducing their imprint in the X-ray regime. DN Tau's overall X-ray properties are dominated by strong magnetic activity. 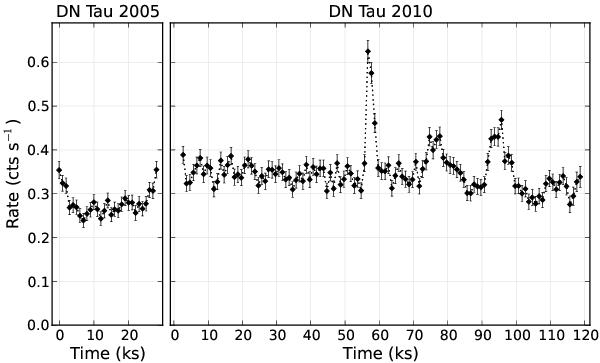