Aims: Three-dimensional (3D) maps of the Galactic interstellar matter (ISM) are a potential tool of wide use, but accurate and detailed maps are still lacking. One of the ways to construct the maps is to invert individual distance-limited ISM measurements, a method we have applied here to measurements of stellar color excess in the optical.
Methods: We assembled color excess data together with the associated parallax or photometric distances to constitute a catalog of ≃23 000 sightlines for stars within 2.5 kpc. The photometric data are taken from Strömgren catalogs, the Geneva photometric database, and the Geneva-Copenhagen survey. We also included extinctions derived towards open clusters. We applied an inversion method based on a regularized Bayesian approach to this color excess dataset, a method previously used for mapping at closer distances.
Results: We show the dust spatial distribution resulting from the inversion by means of planar cuts through the differential opacity 3D distribution, and by means of 2D maps of the integrated opacity from the Sun up to various distances. The mapping assigns locations to the nearby dense clouds and represents their distribution at the spatial resolution that is allowed by the dataset properties, i.e. ≃10 pc close to the Sun and increasing to ≃100 pc beyond 1 kpc. Biases toward nearby and/or weakly extincted stars make this dataset particularly appropriate to mapping the local and neighboring cavities and to locating faint, extended nearby clouds, which are both goals that are difficult or impossible with other mapping methods. The new maps reveal a ≃1 kpc wide empty region in the third quadrant in the continuation of the so-called CMa tunnel of the Local Cavity, a cavity that we identify as the Superbubble GSH238+00+09 detected in radio emission maps and that is found to be bounded by the Orion and Vela clouds. The maps also show an extended narrower tunnel in the opposite direction (l ≃ 70°) that also extends the Local Bubble further and together with it forms a conspicuous cavity bounded by the main Lup, Sco, Oph, Aql, Lac, Cep, and Tau clouds and OB associations. This chain of cavities and surrounding dense regions constitute the first computed representation of the well known Gould belt/Lindblad ring structures. Finally, almost all off-plane faint features that appear in 2D dust maps have a counterpart in the 3D maps, providing the dust distribution in nearby tenuous clouds. 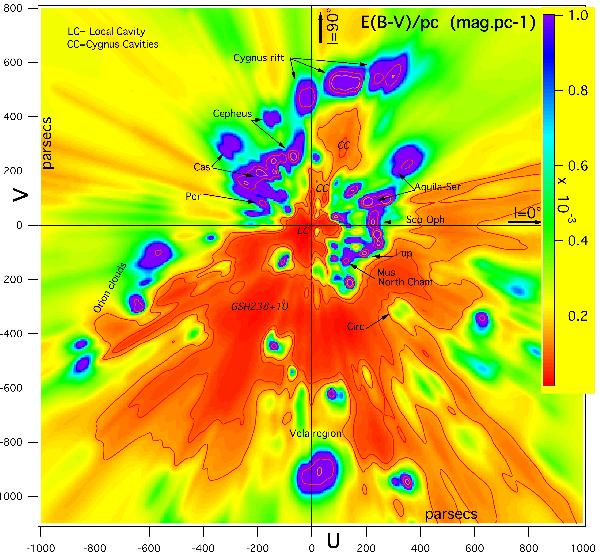