Recently, Nicholls et al., inspired by in situ observations of solar system astrophysical plasmas, suggested that the electrons in H II regions are characterized by a κ-distribution of energies rather than a simple Maxwell-Boltzmann distribution. Here, we have collected together new atomic data within a modified photoionization code to explore the effects of both the new atomic data and the κ-distribution on the strong-line techniques used to determine chemical abundances in H II regions. By comparing the recombination temperatures (T rec) with the forbidden line temperatures (T FL), we conclude that κ ~ 20. While representing only a mild deviation from equilibrium, this result is sufficient to strongly influence abundances determined using methods that depend on measurements of the electron temperature from forbidden lines. We present a number of new emission line ratio diagnostics that cleanly separate the two parameters determining the optical spectrum of H II regions—the ionization parameter q or \cal {U} and the chemical abundance, 12+log(O/H). An automated code to extract these parameters is presented. Using the homogeneous data set from van Zee et al., we find self-consistent results between all of these different diagnostics. The systematic errors between different line ratio diagnostics are much smaller than those found in the earlier strong-line work. Overall, the effect of the κ-distribution on the strong-line abundances derived solely on the basis of theoretical models is rather small. 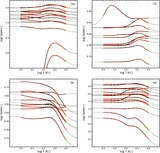