A Statistical Study of Transverse Oscillations in a Quiescent Prominence

The launch of the Hinode satellite has allowed for seeing-free observations at high-resolution and high-cadence making it well suited to study the dynamics of quiescent prominences. In recent years it has become clear that quiescent prominences support small-amplitude transverse oscillations, however, sample sizes are usually too small for general conclusions to be drawn. We remedy this by providing a statistical study of transverse oscillations in vertical prominence threads. Over a 4 hr period of observations it was possible to measure the properties of 3436 waves, finding periods from 50 to 6000 s with typical velocity amplitudes ranging between 0.2 and 23 km s-1. The large number of observed waves allows the determination of the frequency dependence of the wave properties and derivation of the velocity power spectrum for the transverse waves. For frequencies less than 7 mHz, the frequency dependence of the velocity power is consistent with the velocity power spectra generated from observations of the horizontal motions of magnetic elements in the photosphere, suggesting that the prominence transverse waves are driven by photospheric motions. However, at higher frequencies the two distributions significantly diverge, with relatively more power found at higher frequencies in the prominence oscillations. These results highlight that waves over a large frequency range are ubiquitous in prominences, and that a significant amount of the wave energy is found at higher frequency. 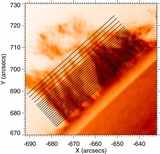