SPT 0538-50: Physical Conditions in the Interstellar Medium of a Strongly Lensed Dusty Star-forming Galaxy at z = 2.8

We present observations of SPT-S J053816-5030.8, a gravitationally lensed dusty star-forming galaxy (DSFG) at z = 2.7817 that was first discovered at millimeter wavelengths by the South Pole Telescope. SPT 0538-50 is typical of the brightest sources found by wide-field millimeter-wavelength surveys, being lensed by an intervening galaxy at moderate redshift (in this instance, at z = 0.441). We present a wide array of multi-wavelength spectroscopic and photometric data on SPT 0538-50, including data from ALMA, Herschel PACS and SPIRE, Hubble, Spitzer, the Very Large Telescope, ATCA, APEX, and the Submillimeter Array. We use high-resolution imaging from the Hubble Space Telescope to de-blend SPT 0538-50, separating DSFG emission from that of the foreground lens. Combined with a source model derived from ALMA imaging (which suggests a magnification factor of 21 ± 4), we derive the intrinsic properties of SPT 0538-50, including the stellar mass, far-IR luminosity, star formation rate, molecular gas mass, and—using molecular line fluxes—the excitation conditions within the interstellar medium. The derived physical properties argue that we are witnessing compact, merger-driven star formation in SPT 0538-50 similar to local starburst galaxies and unlike that seen in some other DSFGs at this epoch. 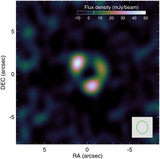