The Ultra-long GRB 111209A. II. Prompt to Afterglow and Afterglow Properties

The "ultra-long" gamma-ray burst GRB 111209A at redshift z = 0.677 is the longest GRB ever observed thus far, with a rest frame prompt emission duration of ~4 hr. In order to explain the burst exceptional longevity, a low-metallicity blue supergiant progenitor was invoked. In this article we further constrain the phenomenology and progenitor properties of this peculiar GRB by performing a multiband temporal and spectral analysis of both the prompt and the afterglow emission. We use proprietary and publicly available data from Swift, Konus WIND, XMM-Newton, and TAROT, as well as from other ground-based optical and radio telescopes. We find some peculiar properties that are possibly connected to the exceptional nature of this burst, namely: (1) an unprecedented large optical delay of 410 ± 50 s between the peak time in gamma-rays and the peak time in the optical of a marked multiwavelength flare; (2) multiwavelength prompt emission spectral modeling requires a certain amount of dust in the circumburst environment. The dust produces a rest frame visual extinction of AV = 0.3-1.5 mag, and may undergo destruction at late times; and (3) we detect the presence of a hard spectral extra power-law component at the end of the X-ray steep steep decay phase and before the start of the X-ray afterglow, which has never been revealed thus far in past GRBs. The optical afterglow shows more usual properties; it has a flux power-law decay with an index of 1.6 ± 0.1 and a late rebrightening feature observed at ~1.1 the day after the first Burst Alert Telescope trigger. We discuss our findings in the context of several possible interpretations that have been given thus far of the complex multiband GRB phenomenology and propose a binary channel formation for the blue supergiant progenitor. 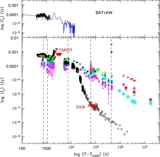