We perform global three-dimensional (3D) radiation-hydrodynamics calculations of the envelopes surrounding young planetary cores of 5, 10, and 15 Earth masses, located in a protoplanetary disk at 5 and 10 AU from a solar-mass star. We apply a nested-grid technique to resolve the thermodynamics of the disk at the orbital-radius length scale and that of the envelope at the core-radius length scale. The gas is modeled as a solar mixture of molecular and atomic hydrogen, helium, and their ions. The equation of state accounts for both gas and radiation, and gas energy includes contributions from rotational and vibrational states of molecular hydrogen and from ionization of atomic species. Dust opacities are computed from first principles, applying the full Mie theory. One-dimensional (1D) calculations of planet formation are used to supplement the 3D calculations by providing energy deposition rates in the envelope due to solids accretion. We compare 1D and 3D envelopes and find that masses and gas accretion rates agree within factors of 2, and so do envelope temperatures. The trajectories of passive tracers are used to define the size of 3D envelopes, resulting in radii much smaller than the Hill radius and smaller than the Bondi radius. The moments of inertia and angular momentum of the envelopes are determined and the rotation rates are derived from the rigid-body approximation, resulting in slow bulk rotation. We find that the polar flattening is <~ 0.05. The dynamics of the accretion flow are examined by tracking the motion of tracers that move into the envelope. The anisotropy of this flow is characterized in terms of both its origin and impact site at the envelope surface. Gas merges with the envelope preferentially at mid- to high latitudes. 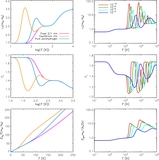