GRB 091024A and the Nature of Ultra-long Gamma-Ray Bursts

We present a broadband study of gamma-ray burst (GRB) 091024A within the context of other ultra-long-duration GRBs. An unusually long burst detected by Konus-Wind (KW), Swift, and Fermi, GRB 091024A has prompt emission episodes covering ~1300 s, accompanied by bright and highly structured optical emission captured by various rapid-response facilities, including the 2 m autonomous robotic Faulkes North and Liverpool Telescopes, KAIT, S-LOTIS, and the Sonoita Research Observatory. We also observed the burst with 8 and 10 m class telescopes and determine the redshift to be z = 1.0924 ± 0.0004. We find no correlation between the optical and γ-ray peaks and interpret the optical light curve as being of external origin, caused by the reverse and forward shock of a highly magnetized jet (RB ≈ 100-200). Low-level emission is detected throughout the near-background quiescent period between the first two emission episodes of the KW data, suggesting continued central-engine activity; we discuss the implications of this ongoing emission and its impact on the afterglow evolution and predictions. We summarize the varied sample of historical GRBs with exceptionally long durations in gamma-rays (gsim1000 s) and discuss the likelihood of these events being from a separate population; we suggest ultra-long GRBs represent the tail of the duration distribution of the long GRB population. 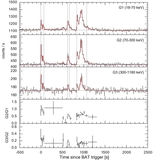