We analyze coordinated observations from the EUV Imaging Spectrometer (EIS) and X-Ray Telescope (XRT) on board Hinode of an X-ray Plasma Ejection (XPE) that occurred during the coronal mass ejection (CME) event of 2008 April 9. The XPE was trailing the CME core from behind, following the same trajectory, and could be identified both in EIS and XRT observations. Using the EIS spectrometer, we have determined the XPE plasma parameters, measuring the electron density, thermal distribution, and elemental composition. We have found that the XPE composition and electron density were very similar to those of the pre-event active region plasma. The XPE temperature was higher, and its thermal distribution peaked at around 3 MK also, typical flare lines were absent from EIS spectra, indicating that any XPE component with temperatures in excess of 5 MK was likely either faint or absent. We used XRT data to investigate the presence of hotter plasma components in the XPE that could have gone undetected by EIS and found that—if at all present—these components have small emission measure values and their temperature is in the 8-12.5 MK range. The very hot plasma found in earlier XPE observations obtained by Yohkoh seems to be largely absent in this CME, although plasma ionization timescales may lead to non-equilibrium ionization effects that could make bright lines from ions formed in a 10 MK plasma not detectable by EIS. Our results supersede the XPE findings of Landi et al., who studied the same event with older response functions for the XRT Al-poly filter; the differences in the results stress the importance of using accurate filter response functions. 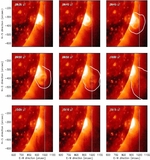