Rapid Evolution of the Solar Atmosphere during the Impulsive Phase of a Microflare Observed with the Extreme-ultraviolet Imaging Spectrometer aboard Hinode: Hints of Chromospheric Magnetic Reconnection

We obtained rapid cadence (11.2 s) EUV stare spectra of a solar microflare with the Extreme-ultraviolet Imaging Spectrometer aboard Hinode. The intensities of lines formed at temperatures too cool to be found in the corona brightened by factors around 16 early during this event, indicating that we observed a site of energy deposition in the chromosphere. We derive the density evolution of the flare plasma at temperature around 2 MK from the intensity ratio of Fe XIV lines at 264.789 Å and 274.204 Å. From both lines we removed the bright pre-flare quiescent emission, and from 274.204 we removed the blended emission of Si VII λ274.180 based on the Si VII λ274.180/275.361 intensity ratio, which varies only slightly with density. In this way the flare electron density is derived with emission from only the flare plasma. The density increased by an order of magnitude from its pre-flare quiescent average of (3.43 ± 0.19) × 109 cm-3 to its maximum impulsive phase value of (3.04 ± 0.57) × 1010 cm-3 in 2 minutes. The fact that this rapid increase in density is not accompanied by systematic, large upward velocities indicates that the density increase is not due to the filling of loops with evaporated chromospheric material, but rather due to material being directly heated in the chromosphere, likely by magnetic reconnection. The density increase may be due to a progression of reconnection sites to greater depths in the chromosphere, where it has access to larger densities, or it may be due to compression of 2 MK plasma by the 10 MK plasma as it attempts to expand against the high-density chromospheric plasma. 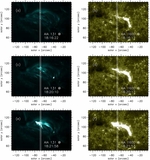