The galaxy cluster MACS J0717.5+3745 (z = 0.55) is the largest known cosmic lens, with complex internal structures seen in deep X-ray, Sunyaev-Zel'dovich effect, and dynamical observations. We perform a combined weak- and strong-lensing analysis with wide-field BVR c i'z' Subaru/Suprime-Cam observations and 16-band Hubble Space Telescope observations taken as part of the Cluster Lensing And Supernova survey with Hubble. We find consistent weak distortion and magnification measurements of background galaxies and combine these signals to construct an optimally estimated radial mass profile of the cluster and its surrounding large-scale structure out to 5 Mpc h -1. We find consistency between strong-lensing and weak-lensing in the region where these independent data overlap, <500 kpc h -1. The two-dimensional weak-lensing map reveals a clear filamentary structure traced by distinct mass halos. We model the lensing shear field with nine halos, including the main cluster, corresponding to mass peaks detected above 2.5σκ. The total mass of the cluster as determined by the different methods is M vir ≈ (2.8 ± 0.4) × 1015 M ⊙. Although this is the most massive cluster known at z > 0.5, in terms of extreme value statistics, we conclude that the mass of MACS J0717.5+3745 by itself is not in serious tension with ΛCDM, representing only a ~2σ departure above the maximum simulated halo mass at this redshift.

Based in part on data collected at the Subaru Telescope, which is operated by the National Astronomical Society of Japan. 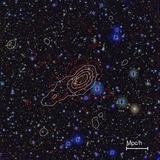