KOI-142, The King of Transit Variations, is a Pair of Planets near the 2:1 Resonance

The transit timing variations (TTVs) can be used as a diagnostic of gravitational interactions between planets in a multi-planet system. Many Kepler Objects of Interest (KOIs) exhibit significant TTVs, but KOI-142.01 stands out among them with an unrivaled sime12 hr TTV amplitude. Here we report a thorough analysis of KOI-142.01's transits. We discover periodic transit duration variations (TDVs) of KOI-142.01 that are nearly in phase with the observed TTVs. We show that KOI-142.01's TTVs and TDVs uniquely detect a non-transiting companion with a mass sime0.63 that of Jupiter (KOI-142c). KOI-142.01's mass inferred from the transit variations is consistent with the measured transit depth, suggesting a Neptune-class planet (KOI-142b). The orbital period ratio Pc /Pb = 2.03 indicates that the two planets are just wide of the 2:1 resonance. The present dynamics of this system, characterized here in detail, can be used to test various formation theories that have been proposed to explain the near-resonant pairs of exoplanets. 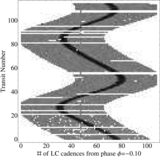