Starspots-Transit Depth Relation of the Evaporating Planet Candidate KIC 12557548b

Violent variation of transit depths and an ingress-egress asymmetry of the transit light curve discovered in KIC 12557548 have been interpreted as evidence of a catastrophic evaporation of atmosphere with dust (\dot{M}_p \gtrsim 1 \,M_\oplus Gyr-1) from a close-in small planet. To explore what drives the anomalous atmospheric escape, we perform time-series analysis of the transit depth variation of Kepler archival data for ~3.5 yr. We find a ~30% periodic variation of the transit depth with P 1 = 22.83 ± 0.21 days, which is within the error of the rotation period of the host star estimated using the light curve modulation, P rot = 22.91 ± 0.24 days. We interpret the results as evidence that the atmospheric escape of KIC 12557548b correlates with stellar activity. We consider possible scenarios that account for both the mass loss rate and the correlation with stellar activity. X-ray and ultraviolet (XUV)-driven evaporation is possible if one accepts a relatively high XUV flux and a high efficiency for converting the input energy to the kinetic energy of the atmosphere. Star-planet magnetic interaction is another possible scenario, though huge uncertainty remains for the mass loss rate. 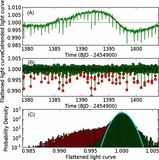