Planet Hunters. V. A Confirmed Jupiter-size Planet in the Habitable Zone and 42 Planet Candidates from the Kepler Archive Data

We report the latest Planet Hunter results, including PH2 b, a Jupiter-size (R PL = 10.12 ± 0.56 R ⊕) planet orbiting in the habitable zone of a solar-type star. PH2 b was elevated from candidate status when a series of false-positive tests yielded a 99.9% confidence level that transit events detected around the star KIC 12735740 had a planetary origin. Planet Hunter volunteers have also discovered 42 new planet candidates in the Kepler public archive data, of which 33 have at least 3 transits recorded. Most of these transit candidates have orbital periods longer than 100 days and 20 are potentially located in the habitable zones of their host stars. Nine candidates were detected with only two transit events and the prospective periods are longer than 400 days. The photometric models suggest that these objects have radii that range between those of Neptune and Jupiter. These detections nearly double the number of gas-giant planet candidates orbiting at habitable-zone distances. We conducted spectroscopic observations for nine of the brighter targets to improve the stellar parameters and we obtained adaptive optics imaging for four of the stars to search for blended background or foreground stars that could confuse our photometric modeling. We present an iterative analysis method to derive the stellar and planet properties and uncertainties by combining the available spectroscopic parameters, stellar evolution models, and transiting light curve parameters, weighted by the measurement errors. Planet Hunters is a citizen science project that crowd sources the assessment of NASA Kepler light curves. The discovery of these 43 planet candidates demonstrates the success of citizen scientists at identifying planet candidates, even in longer period orbits with only two or three transit events. 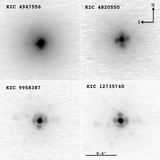