We present detailed analysis of an extreme-ultraviolet (EUV) wave and its interaction with active region (AR) loops observed by the Solar Dynamics Observatory/Atmospheric Imaging Assembly and the Hinode EUV Imaging Spectrometer (EIS). This wave was initiated from AR 11261 on 2011 August 4 and propagated at velocities of 430-910 km s-1. It was observed to traverse another AR and cross over a filament channel on its path. The EUV wave perturbed neighboring AR loops and excited a disturbance that propagated toward the footpoints of these loops. EIS observations of AR loops revealed that at the time of the wave transit, the original redshift increased by about 3 km s-1, while the original blueshift decreased slightly. After the wave transit, these changes were reversed. When the EUV wave arrived at the boundary of a polar coronal hole, two reflected waves were successively produced and part of them propagated above the solar limb. The first reflected wave above the solar limb encountered a large-scale loop system on its path, and a secondary wave rapidly emerged 144 Mm ahead of it at a higher speed. These findings can be explained in the framework of a fast-mode magnetosonic wave interpretation for EUV waves, in which observed EUV waves are generated by expanding coronal mass ejections. 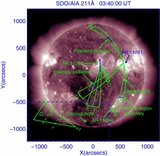