Here we present high cadence photometry taken by the Acquisition Camera on Gemini South, of a close passage by the ~540 km radius Kuiper belt object, (50000) Quaoar, of a r' = 20.2 background star. Observations before and after the event show that the apparent impact parameter of the event was 0.''019 ± 0.''004, corresponding to a close approach of 580 ± 120 km to the center of Quaoar. No signatures of occultation by either Quaoar's limb or its potential atmosphere are detectable in the relative photometry of Quaoar and the target star, which were unresolved during closest approach. From this photometry we are able to put constraints on any potential atmosphere Quaoar might have. Using a Markov chain Monte Carlo and likelihood approach, we place pressure upper limits on sublimation supported, isothermal atmospheres of pure N2, CO, and CH4. For N2 and CO, the upper limit surface pressures are 1 and 0.7 μbar, respectively. The surface temperature required for such low sublimation pressures is ~33 K, much lower than Quaoar's mean temperature of ~44 K measured by others. We conclude that Quaoar cannot have an isothermal N2 or CO atmosphere. We cannot eliminate the possibility of a CH4 atmosphere, but place upper surface pressure and mean temperature limits of ~138 nbar and ~44 K, respectively. 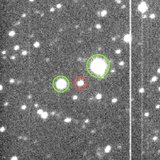