Spectroscopic Observations of Planetary Nebulae in the Northern Spur of M31

We present spectroscopy of three planetary nebulae (PNe) in the Northern Spur of the Andromeda galaxy (M31) obtained with the Double Spectrograph on the 5.1 m Hale Telescope at the Palomar Observatory. The samples were selected from the observations of Merrett et al. Our purpose is to investigate the formation of the substructures of M31 using PNe as a tracer of chemical abundances. The [O III] λ4363 line is detected in the spectra of two objects, enabling temperature determinations. Ionic abundances are derived from the observed collisionally excited lines, and elemental abundances of nitrogen, oxygen, neon, sulfur, and argon are estimated. We study the correlations between oxygen and the α-element abundance ratios using our sample and the M31 disk and bulge PNe from the literature. In one of the three PNe, we observed a relatively higher oxygen abundance compared to the disk sample of M31 at similar galactocentric distances. The results of at least one of the three Northern Spur PNe might be in line with the proposed possible origin of the Northern Spur substructure of M31, i.e., the Northern Spur is connected to the Southern Stream and both substructures comprise the tidal debris of the satellite galaxies of M31. 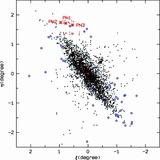