We report on observations of an X class flare on 2011 September 6 by the instruments on board the Solar Dynamics Observatory. The flare occurs in a complex active region with multiple polarities. The Extreme-Ultraviolet (EUV) Variability Experiment observations in the warm coronal emission reveal three enhancements, the third of which corresponds to an EUV late phase. The three enhancements have a one-to-one correspondence to the three stages in flare evolution identified by the spatially resolved Atmospheric Imaging Assembly observations, which are characterized by a flux rope eruption, a moderate filament ejection, and the appearance of EUV late phase loops, respectively. The EUV late phase loops are spatially and morphologically distinct from the main flare loops. Multi-channel analysis suggests the presence of a continuous but fragmented energy injection during the EUV late phase resulting in the warm corona nature of the late phase loops. Based on these observational facts, we propose a three-stage magnetic reconnection scenario to explain the flare evolution. Reconnections in different stages involve different magnetic fields but show a casual relationship between them. The EUV late phase loops are mainly produced by the least energetic magnetic reconnection in the last stage. 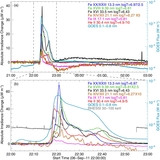