Did the Ancient Egyptians Record the Period of the Eclipsing Binary Algol—The Raging One?

The eclipses in binary stars give precise information of orbital period changes. Goodricke discovered the 2.867 day period in the eclipses of Algol in the year 1783. The irregular orbital period changes of this longest known eclipsing binary continue to puzzle astronomers. The mass transfer between the two members of this binary should cause a long-term increase of the orbital period, but observations over two centuries have not confirmed this effect. Here, we present evidence indicating that the period of Algol was 2.850 days three millennia ago. For religious reasons, the ancient Egyptians have recorded this period into the Cairo Calendar (CC), which describes the repetitive changes of the Raging one. CC may be the oldest preserved historical document of the discovery of a variable star. 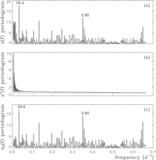