Observations of damped Lyα absorbers (DLAs) can be used to measure gas-phase metallicities at large cosmological look-back times with high precision. Furthermore, relative abundances can still be measured accurately deep into the reionization epoch (z > 6) using transitions redward of Lyα, even though Gunn-Peterson absorption precludes measurement of neutral hydrogen. In this paper, we study the chemical evolution of DLAs using a model for the coupled evolution of galaxies and the intergalactic medium (IGM), which is constrained by a variety of observations. Our goal is to explore the influence of Population III stars on the abundance patterns of DLAs to determine the degree to which abundance measurements can discriminate between different Population III stellar initial mass functions (IMFs). We include effects, such as inflows onto galaxies due to cosmological accretion and outflows from galaxies due to supernova feedback. A distinct feature of our model is that it self-consistently calculates the effect of Population III star formation on the reionization of an inhomogeneous IGM, thus allowing us to calculate the thermal evolution of the IGM and implement photoionization feedback on low-mass galaxy formation. We find that if the critical metallicity of Population III to II/I transition is <~ 10-4 Z ⊙, then the cosmic Population III star formation rate drops to zero for z < 8. Nevertheless, at high redshift (z ~ 6), chemical signatures of Population III stars remain in low-mass galaxies (halo mass <~ 109 M ⊙). This is because photoionization feedback suppresses star formation in these galaxies until relatively low redshift (z ~ 10), and the chemical record of their initial generation of Population III stars is retained. We model DLAs as these low-mass galaxies, and assign to them a mass-dependent H I absorption cross-section in order to predict the expected distribution of DLA abundance ratios. We find that these distributions are anchored toward abundance ratios set by Population II supernova yields, but they exhibit a tail which depends significantly on the Population III IMF for z > 5. Thus, a sample of DLA metallicity and relative abundance measurements at high redshift holds the promise to constrain Population III enrichment and the Population III IMF. We find that a sample of just 10 DLAs with relative abundances measured to an accuracy of 0.1 dex is sufficient to constrain the Population III IMF at 4σ. These constraints may prove stronger than other probes of Population III enrichment, such as metal-poor stars and individual metal-poor DLAs. Our results provide a global picture of the thermal, ionization, and chemical evolution of the universe, and have the potential to rule out certain Population III scenarios. 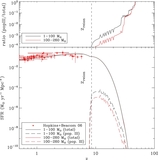