We have made extensive observations of 35 distant slow (non-recycled) pulsars discovered in the ongoing Arecibo PALFA pulsar survey. Timing observations of these pulsars over several years at Arecibo Observatory and Jodrell Bank Observatory have yielded high-precision positions and measurements of rotation properties. Despite being a relatively distant population, these pulsars have properties that mirror those of the previously known pulsar population. Many of the sources exhibit timing noise, and one underwent a small glitch. We have used multifrequency data to measure the interstellar scattering properties of these pulsars. We find scattering to be higher than predicted along some lines of sight, particularly in the Cygnus region. Finally, we present XMM-Newton and Chandra observations of the youngest and most energetic of the pulsars, J1856+0245, which has previously been associated with the GeV-TeV pulsar wind nebula HESS J1857+026. 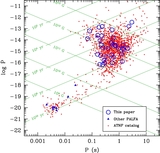